Fika ’Til You Can Fika No More
The Swedes have a way of making life more comfortable in the cold, especially in the autumn and winter, when the sun slants low through the sky, moving in a quick arch along the horizon line, never fully reaching its place overhead. They “fika.”

Fika is both a noun and a verb, according to the web pages I found about its meaning. It either means “to have coffee and a snack” or “coffee and a snack.” It’s kind of like British tea. Teatime is more than just drinking a cup of tea. It’s a break in the day, and should in my mind involve small cakes or a light sandwich. The Swedes fika any time of day or night, popping into cafes and coffee shops -- sometimes mere 7-11 stores with tables and chairs to the side -- warming themselves and refueling with a good dose of caffeine.

I find the concept genius.

I took a weekend trip up to Stockholm not long ago and found the need to make use of this national norm. While walking around the old city, Gamla Stan, the brisk October weather would get inside our coats and under our skin until we just couldn’t take being outdoors any longer; so we find the nearest coffee shop and drop in. We took two fikas on Sunday, once for coffee and a muffin and once for tea, and had we not been anxious to see the city, we probably would have stopped at least once more. 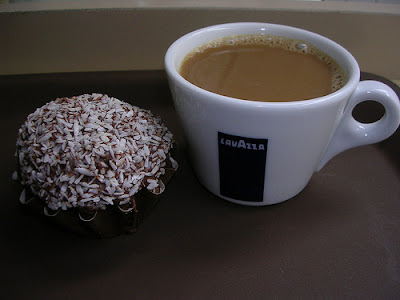 On Saturday, we only fika-ed once, and it was over lunch. Still, I ordered a strong but small cup of coffee and a little chocolate cake topped with a firm shell and sweet coconut flakes so I could say I had a fika. Later on Saturday, we found a huge indoor market that was more for sitting and eating than it was for grocery shopping, and again we would have stopped to fika had we not been bent on breezing through the market and getting outside while it was still light enough to see more of the city. All through the market hall, hundreds of Swedes sat down to little plates of bright lettuces and cold shrimp, or gravalax with dill mustard on brown bread, or coffee and pastries, or white wine with herring sandwiches. This all took place around 3 in the afternoon, so it was neither time for a late lunch or an early dinner. It was fika.