We’ve never had any real food traditions at my family’s Thanksgiving dinner. There was the year when my father, with the discriminating taste he has, insisted that the pilgrims probably ate fresh lobsters, being on the eastern seaboard and all. And there was another year when some family friends joined us for dinner and brought the sickly sweet candied yam casserole, a horror-inducing dish so offensive it makes Christmas fruitcake seem like a thoughtful if not scrumptious gesture.

Three years ago, however, when my carnivorous boyfriend joined us in New York for Thanksgiving dinner, my mother decided she needed to win him over with something really special on the table. Seeing as she doesn’t know much about beer, she decided to go the sausage route. Boyfriend is something of a sausage connoisseur. He has a favorite sausage bar in San Francisco and can tell you the best dog to order across the map, from Berlin to Barcelona to London.

Somewhere, somehow, my mother found a recipe for sausage stuffing. 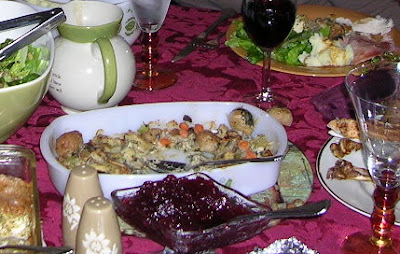 It starts out with raw turkey links, but not the kind used for breakfast, cut into chunks (not crumbled). It requires “peasant bread,” which I thought meant a big round fresh baked loaf of something white and a little squishy on the inside, but apparently refers to some specific type of pre-sliced sandwich bread (as I learned after a punishing grocery shopping trip this year). It takes lots of chopped onions and quartered mushrooms sautéed in butter, as well as fresh thyme, parsley, and sage. There’s chicken broth in there somewhere, and possibly celery—and if there isn’t celery, well then, it certainly wouldn’t hurt.

The funny thing is, I don’t know where in the world she’s hidden the recipe, so I only have a loose idea of how to put it all together. I know it’s baked outside the bird. I know the basic ingredients, and I can guess well enough how they all come together. But my mother has become a stickler for this one side dish, insisting, “It just came out so good the first time, I’m not going to risk messing with it.”

I’m not much of a recipe-follower myself. I might cook two or three things a month from a set recipe; the rest of the time I work off ideas gathered from reading recipes as well as my own experience and some common sense about what’s fresh and available. My mother doesn’t cook a whole lot at all, and she certainly doesn’t follow recipes regularly. She never buys fresh herbs, and I can’t remember the last time I came home and found a real onion at my disposal (there’s always a few jars of that powdered stuff in the cabinets).

As much as I pooh-pooh my mother for her lack of fresh onions, garlic, and aromatics, I will keep my lips shut tight when it comes to the sausage stuffing. We’re on year three with it now, and it is just so damn good. It’s fluffy and moist. It’s flavorful. And it’s unexpected. Who wouldn’t be surprised to find sausage on the Thanksgiving table (unless maybe your last name is Soprano)? Despite the fact that she prepared two big casserole dishes of the stuff, every last bit of it disappeared before the table was cleared--and there were only five of us this year! In fact it was the only thing we polished off completely that night. Next year, I’ll try to get my hands on that recipe index card before my mom files it away again.