The first check mark on my New Year’s Cooking Resolutions 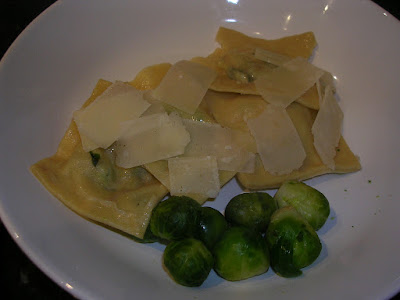 One of my New Year’s resolutions for cooking was to make pasta by hand. It’s a technique I’ve seen done on television, on web sites, and in books many times over, and usually, the cook uses a hand crank pasta-rolling machine. Though heavy, the machines aren’t unspeakably expensive; still, it’s not the kind of equipment I would want to lug around from place to place (I have a history of moving pretty frequently). Needless to say, I don’t (and don’t plan to) own one.

A friend of mine and reader of this blog suggested I try making fat noodles, loosely translated from the Italian as “worms” because they require no special tools at all. The recipe is for these pudgy strings to be coated in toasted breadcrumbs and olive oil. But rustic Italian wasn’t quite what I had in mind either.

In Bill Buford’s book Heat, he writes about an apprenticeship he creates for himself in Italy with a woman who teaches him pasta-making techniques. As I read the section in which he learns the true definitions of tortellini and ravioli (it’s not just the shape, but the words historically distinguish between the pasta casing and the filling, respectively), I felt I had finally come across something I was thoroughly interested in.

I have actually made raviolis once before, but not entirely from scratch, using wonton wrappers for the casings. In other words, it’s not a recipe that I’m 100 percent inexperienced at making. The wonton wrappers were sticky and temperamental. When cooked, a few of them leaked their rather expensive crab filling into the pasta water. And I incorrectly froze the leftovers in one big stack separated by layers of cling film (this was before I learned the secrets of the “flat flash freeze and transfer” method). But overall, I learned a lot from that first experience about how to handle the dough, how to seal in the filling, and how to cook and store them.

I looked up recipes for papparadelle online. I initially thought I might just make wide flat noodles instead of raviolis, but the recipe seemed like it would work in either direction. I settled on one calls for nothing more than eggs and ‘00’ flour, just like Bill Buford’s mentor’s recipe. I didn’t even want to bother with fine semolina, which most recipes call for to use to dust the pasta as it’s rolled. Just eggs and flour.

You start with 1 3/4 cups ‘00’ flour, which is just a special pasta flour. I used the same flour to make an accompaniment of bread (an old recipe for pizza dough to which I added black pepper and dried thyme and let rise a second time), and it worked fine. If I have to buy a special ingredient to make one special recipe, I have to be able to invent another use for it, too. That’s just a rule of mine.

So 1 3/4 cups of flour and 2 eggs. I bought large eggs, having read that one of the problems with pasta recipes is that today’s eggs don’t always contain enough water. Larger eggs means more liquid, right?

Mound the flour on a work surface (I used my bamboo cutting board). Make a well in the middle and crack the eggs into the well. Beat the eggs lightly with a fork, and incorporate the flour into the middle of the well slowly, using your free hand to secure the walls of the well until a dough forms.

These first few steps sounded easier and cleaner than they were. Here’s how it came down:

My first egg nearly overflows the walls, so I inch out a little more flour to make room for egg number two. Egg number two immediately spills over (these are much bigger eggs than I usually work with) onto the cutting board. I use my hands to try to “secure the walls,” but wind up with egg white smeared all over me. Things are getting sticky. I remember the fork and try to use it to pull the eggs, which are now heading toward the edges of the cutting board, into submission. This does nothing but aggravate me. Using only my hands, I pull the flour and eggs toward the center. The egg white very clearly is not interested in becoming one with the flour. It creates a layer of soft and slippery goo that actually allows a whole heap of flour to slide off it.

Slowly, I fold and knead the flour with the eggs until they become one. After many minutes of rubbing sticky bits off my hands and fingers, I finally produce a ball of dough. It’s got that great color of homemade pasta, which allows my confidence to regain.

I knead the ball and it becomes a little stiffer than I’d like. I worry about this for a few minutes and try to remember what happened when TV chefs made pasta. Did they say the dough would be stiff, and if so, how stiff? Should it be supple and warm, like bread? In fact, the very same unease hit me when I made the bread (which is in the oven and smelling lovely at this point). 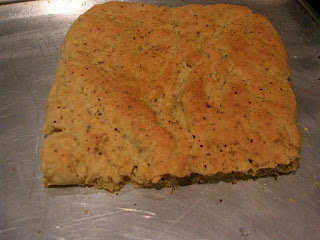 The more I kneaded it, the stiffer and colder it got. I have virtually no heat in my extremities, so there was no body heat from my hands to help. Although most bread baking instructions will tell you to knead the dough for at least five minutes to “develop the glutens,” I actually stopped kneading this time after about a minute and a half because I wanted to maintain that soft skin-temperature feel. (The resulting bread was just fine, though I still have problems with the yeast in England giving me an adequate second rise.)

I wrap the ball of pasta dough in some plastic wrap and set it aside for 30 minutes. In the meantime, I pour a glass of wine, nibble the bread, and do a Sudoku puzzle. The wine is a good idea. It makes the next two steps -- rolling and cutting the dough, which takes more than an hour -- much more tolerable. 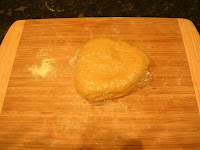 In addition to the pasta flour, I made one other special purpose for this event: a rolling pin. For years, I’ve prided myself on being the kind of cook who makes do with only the bare essentials, and I’ve never seen the need for a rolling pin. “But what about pie dough?” you ask? My mom taught me an old trick that her mom taught her: Fill an old glass mayonnaise jar with ice water and use that to roll pie dough. It keeps the dough cold and works just fine.

The rolling pin I got is very basic. It cost £1 (about $2) and is wood. Unfortunately, it does have tapered handles. I would have preferred a straight French pin, but I wasn’t going to get a better bargain than £1. 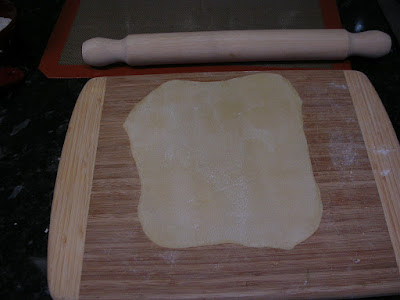 I cut the dough, which is now noticeable less stiff, into fourths, dust my work surface with the flour, and begin to roll from the center outward, rotating the sheet in quarter turns as I go. I begin to worry that I’m unnecessarily rolling too thin. How thin do ravioli sheets need to be? At what point will they be too thin? When I can barely see through the dough, I stop. I cut out roughly 2 1/2 - to 3-inch squares and lay them on a Silpat loosely covered with a sheet of plastic wrap.

Earlier in the day, I made the filling. I took some left over smoked salmon that neither Boyfriend nor I wanted to eat anymore and pan-fried the crap out of it until it tasted good again, with golden crisp edges. To the fish, which I broke into small pieces using a wooden spoon, I added peas and leeks sautéed in butter. A little salt, a little pepper, and there you have it.

Filling the ravioli, sealing them, laying them gently back on the Silpat, and covering them takes another 45 minutes. But this is basically how I planned to spend my night, and by 7:15 when Boyfriend gets home, everything is nearly finished. He helps me by putting a pot of water to boil and setting the table. I give him the “spider” (large basket-like straining spoon, often seen in Chinese restaurants for fishing food out of hot oil), tell him to salt the water, and drop a few raviolis into the pot for him to watch. Meanwhile, I set up another large pan over very low heat and toss in a nob of butter and some basil leaves that I tear off a plant on the windowsill.

I drop raviolis in, and a few minutes later, Boyfriend pulls them out and transfers them to the butter pan. We do this for about 15 minutes until all the raviolis are cooked and coated in basil-scented butter. 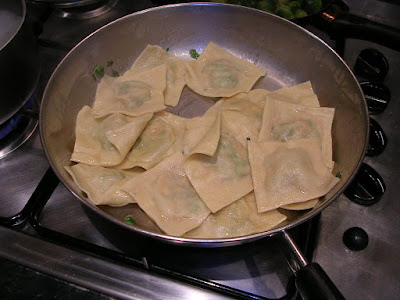 When we sit down to eat, I pull a ravioli from the shallow pasta bowl with my hands. I want to feel the pasta itself. How thick is it? How toothsome? How soft? I nibble using only my front teeth and find it has a very subtle yet exquisite flavor. My worries about whether the dough was too thin turn out to be valid, as some of the pasta is chewier than I’d like it to be, namely the thicker pieces. Still, they’re good, and I’m proud, and Boyfriend is impressed.

We garnish our plates with a few pieces of Gran Padano cheese that I cut using a carrot peeler so that they would be thick. To the side we have some simple brussel sprouts and the bread I made earlier, with olive oil and torn basil for dipping. The wine is good, but my palate is cursing me for be a committed drinker of reds; between the butter and the leeks and the salmon, we would have been much better off with white. 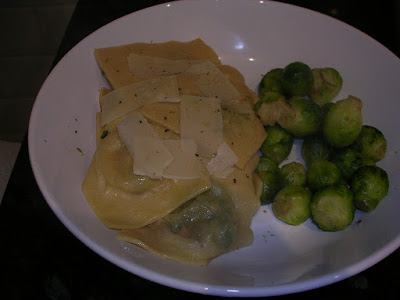