In Brugges, Belgium, I remember a buffet of bread -- croissants, baguettes, loaves of sliced whole wheat, grainary rolls -- served alongside a spread of spreads: jams, marmalade, sweet European butter, Nutella. In Puerto Rico, I remember filling up on five or six short cups of coffee served with hot milk, choosing between doughnuts and guava paste pastries, and finding my sister very upset when she bit into a sweet looking thing only to discover it was filled with ground beef. In London, my mother tittered like a schoolgirl when a posh woman at the hotel breakfast informed her that the puddle of dark purple looking food was “forest fruits.”

In Brussels, at a hotel very near to the E.U.’s HQ, with travelers representing all corners of Europe, I remember watching Germans fill their plates with cold sliced meats at 9 a.m., only to turn around and see Swedes piling puckeringly pickled fishes and cucumbers onto their trays. The English were crowded around a steamer tray of eggs, beans, and cooked halved tomatoes. 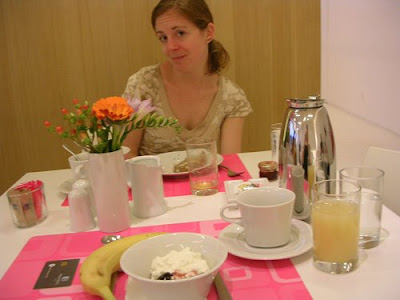 In Stockholm, there was more fish to eat before noon: smoked salmon, pureed salmon spread, and more pickled herring.

My sister and I are in Athens now, where once again there’s a free buffet breakfast included with our hotel. It’s one of my favorite things about traveling in Europe (and Puerto Rico, I suppose). I look forward to waking up not too late and heading down to the large open dining rooms, where I can see who else has spent the night in the kind of hotel I would choose to stay in. How many American accents can I pick out? How many are speaking the local language? And who is eating what? 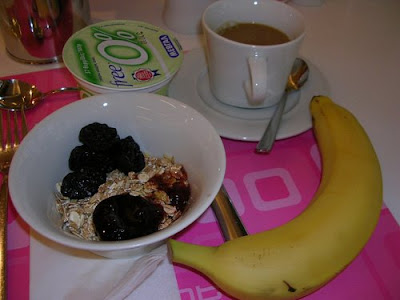 It’s a struggle for me to not fill up on the enormous spreads that area common at European hotels, even when it’s just a Continental breakfast of different breads, jams, dried fruits and cereals. Even then, there’s usually a tray of hard-boiled eggs, two or three juices, and an array of yogurts, which taste different in every country (for example, yogurt is runny in Italy, but as thick as sour cream in Greece). I do have a routine of letting myself choose one or two special treats, usually pastry in nature, and then eating a breakfast that is as close to what I would eat at home a possible, meaning it’s usually yogurt with bananas or dried fruit and natural cereal (essentially, unadorned muesli). 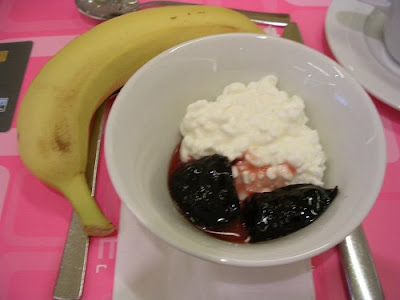 I do my best to put away five or six cups of coffee, which in Europe might hold a mere four ounces. The goal, as I see it, is to fill up on the complimentary caffeine, give my body some sense of routine and normalcy by eating a fairly typical breakfast, and not overdo it on the special treats.

But more than that, I really do enjoy people-watching at breakfast. I wonder who else is eating a typical morning meal and who is diverging wildly from their routine to enjoy the exotic (and sometimes expensive) spread. Do Germans really eat salami sandwiches at 8 a.m. on a Tuesday when they’re home, or is this a special occasion? Do Norwegians actually open a can of tuna before work on the weekdays? Is it ordinary for a Frenchmen to drink hot chocolate while also eating a pan au chocolat? Are the Greeks really filling up on sliced cucumbers, tomatoes, and feta for breakfast? 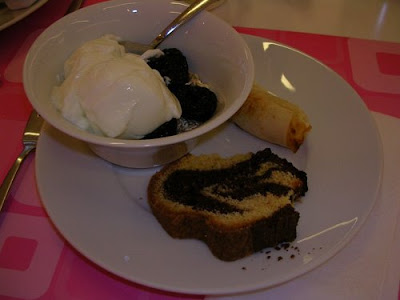 Eventually, the question moves full circle, and I wonder: Do Americans eat scrambled eggs, bacon, potatoes, and toast regularly? I guess they certainly do eat that kind of faire when out on the weekend, but do they eat it at home? Regularly? If I had to guess the typical American breakfast, it would be cereal and milk -- or is that just what children eat? In New York, it’s often a buttered roll and cup of coffee. I worked in a deli and a bagel shop long enough to know that more Long Islanders pick the roll on a work day and save the bagels for the weekend. In Boston, the locals always seem to have a cup of Dunkin Donuts coffee. In San Francisco, it’s stronger coffee, but even after living there for five years, I couldn’t say what the majority of people eat for breakfast in the city by the bay.

Maybe breakfast habits are more personal than cultural, or maybe it’s more regional for Americans, but more cultural for Europeans. 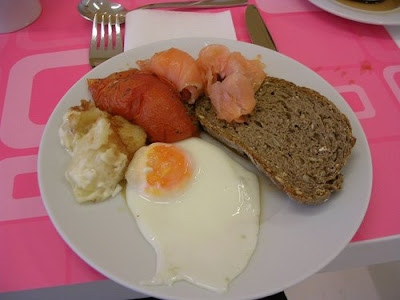