Postcard from Greece: The Authentic Meal

My older sister, my only older sibling, has a big year ahead of her. Last month, her boyfriend proposed (she said yes). Four months from now, she turns 30. And her wedding will be held in August.

She and I are close, but it’s been more than ten years since we lived in the same town. With all the hoopla coming up, I wanted to get some alone time with her, so I asked if she’d come to London to visit. She’d never been overseas before.

“You know what I’d like to do?” I told her via IM when she was booking the flight to the U.K. “I’d like to take a vacation while you’re here -- get out of London for a bit. I know London will be new for you, but I could stand to go elsewhere for a few days.”

“I was thinking maybe Greece.”

Older Sister has spent the last four years of her life holed up in Buffalo, NY (which is perpetually under at least two feet of snow), studying and teaching philosophy. The next year of her life will be spent writing her doctoral dissertation. She’s all up on Plato, Socrates, and Aristotle, so it’s been a dream of hers to make it to Athens and see the Acropolis.

In the weeks leading up to the trip, she forwarded me a link to a food enthusiast writer who has a complete site dedicated to Greek food. Her subject line was, “This site was made for you!”

And that’s the set up: Older Sister’s first time overseas and she’s going to her Mecca. I’m really thrilled to be spending time with her and desperate to get out of London for a few days. We’re both really sick of cold weather.

The Authentic Greek
Our much-needed trip was filled with great foods, over indulgence, historical and philosophical appreciation, and lots of walking. (More on some of those details in another post.)

While strolling around Athens during our last day in the city, I asked Older Sister what she would say when people asked her, “How was Greece?” Seeing as it was her first time in Europe, I was curious to know what her first impressions were. What was her overall sense of the place?

She said she was surprised that the city was so modern, and that she was really taken by the Acropolis. I know she was also annoyed with the fact that smoking is still allowed almost everywhere in Athens, and earlier in the week she said something to the effect of, “You know how in all those European movies you see dozens and dozens of people zipping around on Vespas? I didn’t know that was real.”

I then posed a similar question to myself: What would I say, upon returning, about the food?

The main thing that struck me was that I’ve eaten a lot of very authentic Greek food in my life. Sometimes I hear from other travelers that the American version of a particular food is remarkably different than its homegrown variety. Italian-American food is quite different from the regional cuisines across Italy. Thai food States-side doesn’t taste nearly as fresh and vibrant as the same dishes as eaten in Thailand (although I’ve never been to Thailand, I’ve also heard some discrepancies about whether chopsticks are used in the country at all, despite the fact that most American Thai restaurants provide them). Even “French press coffee” isn’t what you’d get in Paris if you ordered “un café.” But somehow, when it comes to Greek food, I’ve managed to eat some very authentic stuff pretty far from the mother ship.

Last summer and for a few weeks this past December, I lived with some friends in Astoria, Queens, a neighborhood known for its first-generation Greek heritage. Along or right off Ditmars Boulevard (the main drag), you’ll find shops with names like Athena’s Car Service, Artopolis Bakery, Taverna Kyclades, Titan Foods. There’s even Neptune Diner. There are at least three souvlaki carts within four blocks of one another in the summer. Just below the last stop on the N/R train (it’s an elevated train out there) there’s phone booth-sized bakery cart that sells coffee, doughnuts, buttered rolls, and so forth; in Athens, we saw bakery carts from morning until night selling sesame seed studded bread rings for 50 cents, among other, sweeter baked goods.

The one Greek food that the U.S. has drastically reinvented is the Greek salad. In Greece, there’s no lettuce -- and there may be olive oil a plenty and dried Greek oregano, but there ain’t no vinaigrette. The cheese comes in a huge slab, rather than crumbled. A basic salad in Greece, called a peasant salad, is nothing more than very thick cut cucumbers and tomatoes and a hunk of feta cheese perched on top. Thin sliced green peppers and red onions are optional, and a few purple olives might be thrown in for color. And that’s it. No pepperoncinis, either.

Then there were some things I found in Athens that seem to be missing altogether from Astoria, but it’s possible that I just haven’t come across them yet. For example, Athens has ouzeries or mezedopolions, which are like tapas bars in that you share a few small plates with friends while slowly sucking back a couple of drinks. The Greek restaurants in Astoria are mostly classified as tavernas, but to be honest, I haven’t quite figured out what makes a taverna unique. The ones in Athens look like typical local restaurants. The ones in Queens seemed to almost have the air of a steak house, but still retaining that local neighborhood restaurant feel. In Athens, it seemed like you could order small plates to share or a substantial meal at any style of eatery, from taverna to ouzerie to café. 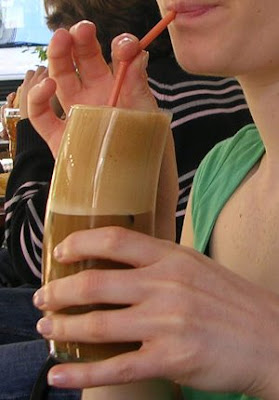 Another difference between Athens and Greek-proud Astoria is that the local drink of Athenians is the Nescafe frappe, a cold coffee drink with so much thick wonderful foam on top it looks like a smoke stack. Oh, it’s a beautiful drink. You can order it plain, medium sweet, or very sweet, and with or without extra milk. In Astoria, on the other hand, even in the dead of August I didn’t see too many iced coffees, Frappuccinos, or other cold caffeinated drinks (no more than anywhere else in New York, I suppose). This may be due to the lack of café culture, except that so many of the other eating rituals of Greece, like dining after 10:30 p.m., have thrived along Ditmars and 31st Avenue.

I’m sure (having read that Greek food site) that the foods of Greece are further specialized regionally -- a country broken up by mountains and island formations simply has to. I’m sure there are certain regional foods that you just can’t get in the U.S. because no one carries that particular kind of fish or varietal of produce. But many of the mainstay foods of Greece that I’ve eaten in New York are done dead-up authentically. I have a much stronger appreciation now for the Greek culture that exists in Queens. It’s only through dogged persistence and pride that a community can so freshly preserve its culinary identity.