On Sunday, I went down to the river and took a stroll along the south bank Thames Path, starting at London Bridge, heading west, and crossing to the north side of the river at Waterloo. From there, I wandered north to Covent Garden. I really enjoy this particular walk because it ends up in an area that is at once both a tourist attraction and a place filled with hidden treasures if you only turn down the wrong side street. The tourism brings in phenomenal street performers, who have to audition to secure an acting space at Covent Garden. The old covered market dates back hundreds of years, but has been converted into small shopping mall. Shooting off the central square, alleys the width of two donkey carts hold boutiques, pubs, small theaters, cafes, and the like.

I don’t know how I’ve managed to miss it before, but along one of the more traveled roads (Garrick Street) is a candy store. It’s not just any candy store. It specializes in international stuff as well as limited edition pieces.

The unfortunately named Cyber Candy (it sound like it should be a novelty and gag shop) has two stores, one in London and one in Brighton, U.K. The company also seems to do a good deal of business via its web site as well.

When I found the shop, I thought I’d poke around, but not buy anything, on account of it being a danger zone for me. When I first arrived in London back in September, I went on something of a candy bar kick. It last through November. At the time, I didn’t even think of my candy bar obsession as a phase, but looking back on all the candy I ate -- and I can name almost a dozen distinct candy bars that I ate in those three months -- it suddenly seems excessive.

The purpose of my candy bar kick was that there were a number of English or European chocolates that I had heard about, either through reading or talking to people, but had never tasted before. Then again, there were also some candies that I have had before, but not in so many years that I really couldn’t remember accurately what they were all about. 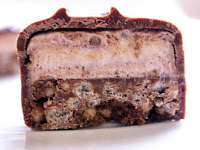 The Double Decker (shown) is one of my favorites; it’s a layer of airy nougat and a layer of crispy puffed rice cereal embedded in soft chocolate, all covered lightly in milk chocolate. The Yorkie Bar, on the other hand, whose slogan is “It's not for Girls” and the "not" is underlined(incentive enough for me to buy it without reading the description) is nothing more than a fat rectangle of low-grade milk chocolate. The famous English Mars Bar has been through a makeover in the last decade, having once held the reputation as a super chewy, machismo, after-soccer refueling tool, but lightened up a few years back (the fillings are now whipped and thus less dense) to catch a more diversified market. In other words, it’s now practically the same as a U.S. Milky Way.

Bounty Bars seem like they are the same exact thing as a Mounds Bar in the U.S., but the Bounty Bar has coconut and milk chocolate, whereas the Mounds is dark. And of course for all bars, the chocolate in the U.K. has more sugar and less corn syrup, or sometimes no corn syrup at all. It’s the same reason name-brand sodas taste different outside the U.S.

When I was feeling less adventurous (for example after the Smarties episode), I stuck to the Cadbury section and picked a new variety on the old tried-and-true staple: solid milk chocolate, caramel filled, Turkish delight filled, fruit and nut, hazelnut, and crème egg, which can be found in bar formation as well as the egg-shaped classic. The Cadbury Twirl became a short-lived favorite of mine around the holidays, when I brought a five pack back to the U.S. and shared them with my sisters, often having them with a bit of strong coffee. It’s a glorious combination. Twirl bars are aerated rolls of chocolate that flake and crumble as you eat them, giving a new texture to otherwise mundane, but very tasty, milk chocolate. Like Twix, there are two fingers in a packet, so they’re perfect for sharing (though the old slogan was “Two for me, none for you”). They also make great pick-me-ups on long flights, so sometimes I stash a Twirl or two in my carry-on bag

I do feel the need to point out that all this candy eating was spread over several months and made up the vast majority of sweets that I ate during this time. It’s not like I was eating all this junk and coming home to Swiss rolls and Hostess cupcakes. Our flat is stocked with produce, fresh herbs, skim milk, yogurt, eggs, whole grain bread, smoked salmon and so on. A single bar of chocolate sometimes lasted several days -- really!

This is starting to sound too defensive, even for me. Doth I protest too much?

So those were some of the typical candy bars I ventured into while here. You’ll notice a distinct pattern: “candy” means chocolate.

Venturing Beyond the British Isles
Back to last Sunday ... I found this place called Cyber Candy. Inside, I could immediately tell that the goodies were grouped by country. A huge bay of shelves was dedicated to Japanese candies and snacks, which wasn’t particularly interesting to me because it mostly contained things I could get when I lived in San Francisco, like Pocky and the hilariously translated Collon Creams.

Another few shelves held specifically regional American candies, like the Idaho Spud, Valomilk, Skybar, Zagnut, and so on. Although I did take my time looking through all these selections, they’re old news to me. Back in 2004, I dedicated a few weeks of my life sampling regional sweets after reading Steve Almond’s book Candy Freak. The experience coincided with an academic paper I wrote about candy as a cultural artifact. If you’re going to be reading and writing about candy, it’s very difficult to not eat it in the process.

Still, among the American stuff at Cyber Candy, I did find some limited edition goodies, including a Java Twix. Released in Japan (and possibly not limited edition, but more likely just a regional bout of test marketing) there were sour cherry M&Ms and raspberry M&Ms. An explosion of Reese’s products have been or are being test-marketed across America. In the product line are Reese’s Peanut Butter Cups in a classic wrapper, a Reese’s brownie, Reese’s with nuts, the deep-dish big cup, and a white chocolate cup. 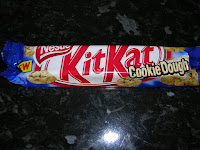 Finally, I gravitated to the Kit Kats. The Kit Kat brand is highly experimental, but it tends to release its more adventurous products in Japan and other Asian countries. I’ve heard of the Kit Kat filled with green tea flavored crème, apple crème, and strawberry crème. Cyber Candy had all those. Most people have seen the Kit Kat Chunky and the Kit Kat Chunky with Peanut Butter.

Some of the Kit Kats you probably haven’t heard of are a Japanese one that’s robed in white chocolate and flecked with vanilla bean, and a “double dark” or "double chocolate" Kit Kat, which isn't even on Wikipedia yet -- though not to be confused with Kit Kat Dark, which was released in the U.S. a few years ago and then promptly taken off the market but is wholly ubiquitous here in the U.K. (it’s constantly on sale at the grocery store, alongside 10 packs of cappuccino -- another one not on Wikipedia -- and orange flavored Kit Kats). The Kit Kat Dark might even have been revived in the U.S., though I’m not sure. 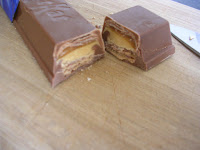 Because the Kit Kat has such an adventurous range, I felt I owed it to Nestle to dabble in its goodies. Hailing from Australia and in a shiny blue wrapper was the “New!” chunky Kit Kat Cookie Dough. The other one that tickled my fancy was Wa Guri Kit Kat, or chestnut flavored.

Two bars would keep my total to just less than £3 (about $6 USD), which still seems a bit extraordinary, but this is truly the kind of thing I consider fun. I was planning to blow a wad of leftover GPBs on candy at the airport when I leave in a few days, so I might as well spend it on some things I’ll never get to try anywhere else.

The cookie dough Kit Kat was very good, with a nice weight to it. There’s something quite visceral about sinking your teeth into a candy bar that has real heft. The cookie dough layer tasted more like that cheap peanut butter filling you find in mass produced chocolate bars, only without an outright salty-peanut flavor. 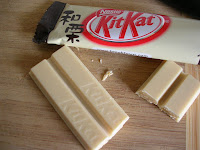 There was nothing dough-like about it. But it was still very yummy. The chestnut Kit Kat surprised me in that it was covered in white chocolate rather than milk chocolate. As a matter of pride, I generally despise white chocolate. It’s not chocolate. Nevertheless, the chestnut lent the bar a coffee flavor that I wasn’t expecting.

Two days later, I had to go back to Covent Garden to meet a friend back so I got there 45 minutes early and hit the candy store a second time. Again, I limited myself to a £3, though I went over budget this time by a few pence. I picked up an eggnog Cote d’Or bar filled with eggnog goo, a straw shaped piece of Moomin licorice from Finland with pear and vanilla yogurt filling, and a small package of Tim Tams, which are chocolate “biscuits” from Australia. “Biscuit” loosely means “cookie,” but also includes anything with a wafer. For example, those Kit Kats that are always on sale in the supermarket are shelved in the biscuit aisle rather than the chocolate aisle. 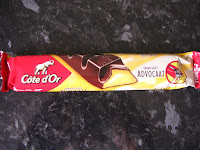 The Tim Tams appear to be a chocolate finger cookie or sandwich cookie with chocolate cream that’s covered again in milk chocolate.

I haven’t had a chance yet to try all the things I bought, and my little stash of international candies is slowly growing out of proportion for someone who is about to pack up all her things and leave the country. Good thing they’ll all fit in my carry-on luggage.