I told Older Sister not long ago that I come up with great inventions all the time.

“Well,” I said, “there’s Fake Cakes. My idea is to have a ‘bakery’ that had a couple of replica or model tiered cakes made entirely out of non-perishable stuff. But the top tier can always be real cake for show, like when the bride and groom cut a wedding cake. The concept is that you don’t make a specialty cake for any one person’s event, but that you have maybe a dozen or so of these fake cakes that you rent out. There’s no rent or overhead costs for keeping a bakery because you don’t actually need any physical space except a place to store your fake cakes. There’s no food costs, unless you are the one supplying the top tier real cake, though you certainly wouldn’t have to. You’d bill a rental fee plus a deposit in case your displays were damaged. And you could easily ship them via an overnight carrier, so you wouldn’t even have to deliver the model personally.”

“Well,” I said, “I think the Christian market could be exploited phenomenally more than it is now. My idea is to sell framed, wall-hanging sized photographs of young women in scenes made to recreate various moments in the life of the Virgin Mary’s, maybe a young mother in the manger kind of thing. Maybe I could call it 'The Mary Series.' The trick would be to basically make the photos modern in style and even modern in composition. They would have to be actual real pieces of art, but if you mass produced them and sold them to a Christian market, you’d make a killing.”

I have some food-related inventions, too. One of them is called Saturday morning milk, and I mentioned it in a blog a few months ago.

Another idea that I had was actually made. The good people at Gelateria Naia had some friends over at Takara Sake who were willing to give them a hand in making my gelato idea: sake flavored gelato, as an homage to San Francisco's Asian cultural (see under July). 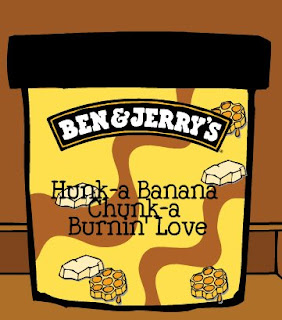 I’ve had two other really great ideas for ice cream flavors, both of which I’ve submitted to Ben & Jerry’s. One is called New York Coffee Cake Break and the other is Hunk-a Banana Chunk-a Burnin' Love. The names even sound like flavors Ben & Jerry’s would produce. So here are my ideas:

New York Coffee Cake Break is coffee ice cream with a chocolate fudge swirl, espresso bits, and hunks of frozen coffee cake, with particular emphasis on the crumble topping. There are two doses of caffeine, plus three meals (dessert, breakfast, and coffee break) rolled into one, to keep you going at the pace of a New York minute.

Hunk-a Banana Chunk-a Burnin’ Love is an Elvis-inspired ice cream flavor, based on The King’s famed banana and peanut butter sandwich (hold the bacon, please). It’s a chunky banana-flavored base (Chunky Monkey-style), with honeycomb bits, a peanut butter swirl, and white chocolate chunks. (The white chocolate is meant to remind us of Elvis’ white suits, which he still wore even when he got “chunky.”)

Note: I actually have submitted both of these ideas to Ben & Jerry's. Don't be cruel. Make my flavors!