The Price of One Week

A little more than I year ago, I went to COPIA in northern California, which is a center for wine, food, and art related to wine and food. There was a photography exhibit there by Peter Menzel and Faith D’Alusio based on their book, Hungry Planet.

Hungry Planet is a series of photographs of families from all around and all the food they’ve consumed in one week. (I’d love a copy as a gift -- Update 9/29/08 Thanks, Boyfriend!) Menzel and D’Alusio have a second book called What the World Eats: Hungry Planet, which from what I can tell, is basically part two of the same concept.

The exhibit must have had at least two dozen huge photos, and next to each one was an itemized grocery list and total grocery bill given in both the local currency and the U.S. dollar equivalent at the time.

There are major differences, of course, between the diets of people from different countries. 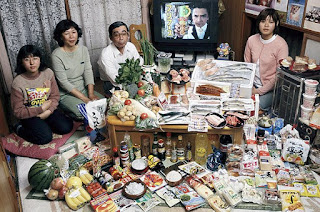 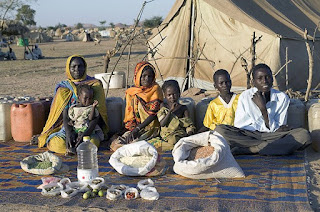 But what caught my attention even more than the culinary cultural differences was the amount of packaging. If you pay attention to the product packaging, the differences are astounding between rich and poor countries. Surprisingly, the amount of packaging doesn’t tell us which families will be obese and which won’t. See, for example, a Japanese family’s eats for the week compared to the stark image of a family from Chad.

Time magazine online has a selection of images from the book.

And here a sampling of the stats: