Last night, we went to Radegast Hall & Biergarten, a German beer garden that openly somewhat recently in Brooklyn, NY. This was our second visit, but first time eating there. 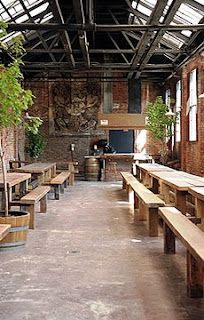 Radegast can’t claim the long heritage of the better known and more popular Bohemian Hall & Beer Garden, which is to the best of my knowledge the last remaining beer garden in New York’s five boroughs from the early 1900s. However, Radegast has an impressive German and Belgian beer list as well as the best sauerkraut I’ve ever eaten.

The sauerkraut probably isn’t a traditional Bavarian recipe, but as far as I can tell, it is unique to Radegast and probably the creation of someone on staff. It’s sweet, with hints of apple juice, a mild smoky pork undertone, and a little kick of hot pepper.

The beer list is equally unique to Radegast. German beers, particularly Weisses, dominate the taps, though there are a few Czech brews and one or two others from Austria and Belgium. The bottled list is divided into German and Belgian beers, with plenty of options I’ve never tried before (which could very well turn me into a regular customer; I love exploring a good beer list over time).

The hall itself is huge. The “garden” is actually covered, but the roof is retractable. Radegast serves a table-service brunch and dinner, but also offers a late night grill until 2 a.m. The grill isn’t a meal deal by any means, but you can eat a small dinner for less than $10. I had a bratwurst (pork) with two pieces of grilled bread and a mound of that astounding sauerkraut for 8 or 9 bucks. Boyfriend got the kielbasa [they were out of weisswurst (veal)] and opted for fries instead of bread. There’s a mustard bar to the side of the grill, and if I thought the kraut was something to write home about, the Radegast mustard deserves its own postcard. It’s mild to medium intensity, slightly sweet, and goes so well with the kraut.

One thing to watch out for at the beer hall is that the prices aren’t on the beer menu, but they are on the web site. All the draught beers in American pints (16 oz.) go for $7. You can drown yourself in a full liter of beer for $13. And pitchers are offered for $18. The bottled beers vary, but nothing costs more than $10.