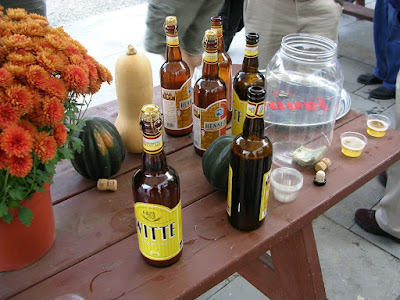 American beer drinkers, or at least the vast majority of them who make up focus testers, are obsessed with “purity.” They think something is wrong if their beverage is cloudy, and as a result, the beers produced in the U.S. are almost always filtered. As a result, its flavors are dulled. And like milk and cheese, beer in the U.S. is also pasteurized, another step in the process that often sacrifices flavor for perceived safety. However, while pasteurization is legally required, filtering is not.

Look into a Belgian beer bottle, on the other hand, and you’re likely to witness a miraculous dance of particulates in suspension, and therefore richer and more complex flavors and smells.

There are very few breweries Stateside that go against the grain, and Brewery Ommegang is one of them. I’ve only been drinking Ommegang beers for a year or two. For the most part, it makes Belgian-style beers, particularly its namesake abbey-style beer. 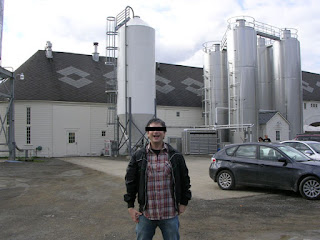 The brewery, which opened in 1997 but was recently bought by Duvel USA (Duvel was also an original investor, according to Wikipedia), is located in upstate New York, about a four-hour drive from New York City, just south of Lake Otsego. The region is also home to the Baseball Hall of Fame, and when I realized that, I set my mind to taking a mini vacation and seeing both in one short weekend.

Boyfriend (like how I protect his identity in that photo?) and I headed up on a Saturday morning, arrived in the afternoon, zipped through the Baseball Hall of Fame -- a static and forgettable museum charging 16 bucks for very little -- and reached Ommegang by 3:30, which was plenty of time to take a look around, have a few tastings, and buy way more beer and beer accessories than we probably should have before closing time at 5:00. 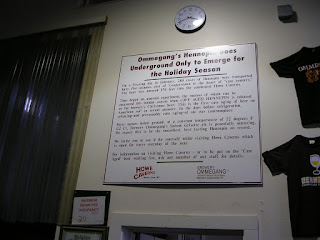 The brewery is really just two barns with a couple of huge tanks both inside and out. On site, the beer is brewed, bottled, and aged, with the exception of one beer variety selected annually to be cave aged in nearby Howe Caverns. Unlike the chalk caves of France, Howe Caverns are limestone and lie about 100 feet deeper in the earth. But they both are extremely regulated climates and dark, which is ideal for aging champagne, wine, beer, and cheese.

We got the free “tour” of the brewery, but the employee showing us (and about 30 other people around) seemed like she had had enough for one day and was shouting out her spiel by rote, making it hard for me to tune into what she was saying. I know not all the carbonation happens in the bottle, but the final fermentation is always done in-bottle. I know that the beers are flavored with a number of different spices, including West African grains of paradise, coriander, and star anise, but I wasn’t able to follow which beer got which spices, though some of them you can tell by taste. 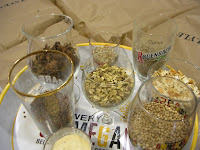 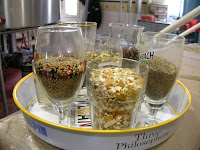 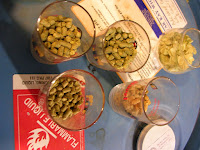 We bought a case of 750ml bottles: three Wittes, three Hennepins, three Rare Vos, and three Abbeys for about $66, or about $5.50 per bottle. In the grocery stores, a bottle of Witte or Abbey can go from $8 to $12, so this was a good deal for us. For $30, we significantly beefed up our specialty beer glass collection with six new additions (technically, five new additions, as one of the glasses was a gift for friends).

Here are some notes on the beers.

Beer Notes
Ommegang Witte was recently ranked (2008 World Beer Cup) number two of all wheat beers. An employee at the brewery, upon telling us this, added, “We see it as an honor to be second to Hoegaarden,” which she correctly pronounced WHO-garden, leaving me in a little state of glee.

I wasn’t always a fan of lighter beers, but Hoegaarden helped me expand my horizons, and now I love the Witte. It’s refreshing and crisp, and goes well with summer outdoor foods, like grilled chicken, souvlaki, or salads, as well as German foods, like sausages, sauerkraut, or even just a simple hot dog. You can drink it with a slice of lemon, though a slice of orange is preferable in my opinion, as the beer is flavored with orange and coriander.

Hennepin is my least favorite of Ommegang’s year-round brews because it’s very hoppy (I prefer malt flavor to hops in darker ales). Hennepin is a Saison ale, so it’s technically amber in color. If you like hops, this is a great beer, with a lot of structure yet blended flavors. Only the hops are really assertive, but then again, I might feel that way because I’m not especially fond of the hops.

Rare Vos and Hennepin both collect sediment at the bottom of their bottles. Although a friend of mine lectured me once about being careful not to drink the sediment (“It’ll give you the runs!” he warned), the employees at the brewery said go ahead and drink it. One of the beer’s sediments -- and I forget which one -- actually contains a fair amount of potassium and other vitamins and minerals. Stephen Beaumont, a beer book writer, is quoted on the Ommegang web site for advocating the inclusion of some of the yeast sediment in a pour of Rare Vos, saying it intensifies the spices while mellowing out the beer’s sweetness.

The Ommegang Abbey Ale is the darkest and most intense of the four beers we brought home. This is not the kind of beer you want to drink when the weather is warm. To me, it’s a holiday beer, or at the very least a cold weather beer, as is Chimay Blue. It’s a sipping beer or an accompaniment to food. Witte is really the only Ommegang beer I would drink on its own. Even the Rare Vos requires some snacking to balance the strong flavors (cheese, fruit, charcuterie, crusty bread, olives).

Another beer that the brewery puts out all year long, but which we did not tote home with us, is Three Philosophers. Three Philosophers is a very strong beer, weighing in at 9.8% alcohol. But it’s not 100% beer -- it has cherry lambic (kriek) added.

Drink Up
The biggest reason for me to drink Ommegang beer more regularly than imported Belgian beers or even German ones is that it’s brewed in the same state where I live, meaning it’s less expensive and has a smaller carbon footprint. On the other hand, the brewery imports its 750ml bottles from Europe, so there is still trans-Atlantic shipping involved, which I’m not thrilled about.