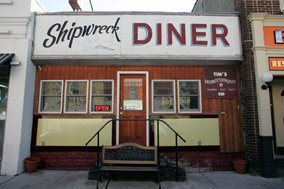 It used to be known as “Otto’s,” but Otto needed to retire (or partially retire, as he still can be found from time to time working the front of house or clearing plates), and his son Tim took over. My family and I interchangeably call it Otto’s, Shipwreck, or Tim’s Shipwreck, but never simply Tim’s.

What I like about Tim’s (that was pretty cheeky, eh?) is its balance between tradition and inventiveness. The food and atmosphere is, put simply, satisfying. It’s a classic diner, like the railroad car diners of yore, but instead is shaped like the inside of a small ship, which fits the marine mood of the tiny town to a tee. Some of the servers (mostly the adult waitresses) are lifers -- come in frequently enough and they’ll know you by name. Come more than just occasionally, and they’ll call you honey and ask how your mom/sister/uncle Arty is doing.

Upon being seated, if you’re not given a complimentary plate of the sweet corn bread and homemade berry jam, ask for it! Every so often Tim’s Shipwreck runs out of it, but if you see other customers eating it, you’ve probably just been overlooked and should pipe up. The jam in particular is not to be missed, and the combination of the two together is delightful.

Don’t expect to find anything on the menu that drifts too far from the typical arena of diner food, but do admire the daily specials for their ability to reinvigorate classic dishes. On a recent visit, for example, my mother was scanning the omelet list, and nothing on it really excited her. Then she saw on the specials board a ratatouille omelet. It was a done deal. Home fries and toast rounded out the meal for about $7.

Sweet breakfast options are equally inventive without being risky. Pumpkin pancakes are a staple in the autumn months. Stuffed French toast with bananas, and homemade cheese blintzes are two other dishes that frequent the specials board. Savory brunch-goers are faced with tough options, choosing between omelets that are donned with hunks of sweet Italian sausage or a breakfast concoction that somehow manages to work in a serving of homemade chili.

At times, the potatoes have been limp and the jam can taste a bit cloying, but these things are worth overlooking for the otherwise fulfilling experience.

Read local newspaper reviews of the diner, which are plentiful, but dismiss the warning that you might wait an hour for a table. It’s just not true. A 20-minute wait isn’t unheard of for a reasonably sized party of two or four, but an hour is an exaggeration, especially in the warmer months when plastic porch furniture opens up extra seats in the back “garden.” (I prefer to sit inside year-round. I find the back alley to be a little cramped.)