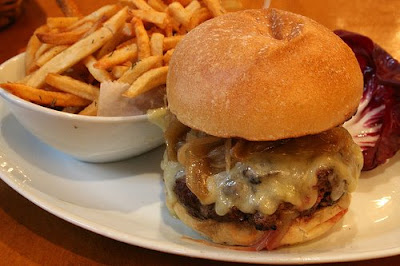 (Note: I did not take this photo. It came from a Flickr account called "Eating in Translation.")

The Scene: 5 Napking is in Hell’s Kitchen, but for all intents and purposes, it’s in the Times Square area. The dining room is large and spacious. It’s dark and a little noisy, but not deafening. Booths give diners both room enough to move around and privacy from others; a few traditional tables dot the floor, so be sure to request a booth.

Reservations: The restaurant takes a limited number of reservations with the rest of the spacious room left for walk-ins.

Bar: The bar area is small, so don’t realistically expect to wait for a table here.

Menu: Despite its appearance, the menu is small. On the menu, there are a number of things that I totally dismissed, such as a sushi list. It’s my feeling that sushi should not even be offered at a restaurant called 5 Napkin Burger. I also dismissed at least one starter (Vietnamese summer rolls) and several entrees (spaghettini and omelet Florentine). There are seven burgers, but I wouldn’t order the veggie burger because it is completely unspectacularly adorned (sauce, pickles, lettuce, tomato), and I would be hesitatnt to order the Ahi tuna “burger” as it is really just Ahi tuna on a roll with some Asian accessories, like wasabi mayo.

This leaves five choices: the Original 5 Napkin burger (carmelized onions, comte, rosemary aioli), cheddar bacon burger, Inside Out burger (no bun, wrapped in lettuce), lamb kofta burger, or the Italian turkey burger (frightening concoction of tomato sauce, vinegar peppers, and mozzarella on a sesame egg bun). They all come with fries, and the fries are thin and delicious.

The bun was the tastiest part, shiny with egg on the outside like a perfectly baked loaf of Challah. The onions and comte cheese were very good. The beef patty itself was hefty, though over salted. And the price was a little high.

Beer: Finally, the beer menu is something to behold. It’s not a masterfully crafted themed list, but it does offer an astounding variety by the bottle. Many beers I had never heard of before and were from microbreweries in the U.S. Belgians made up about half the list. None of the imported bottles were bargains, but out-of-towners experiencing New York for the first time and pressed to eat in the Times Square area would be pleased with the selection.