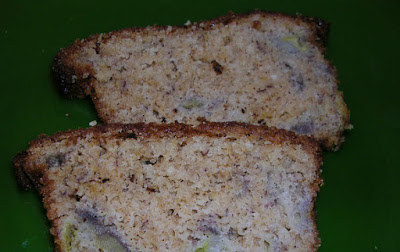 One of the first things I learned how to cook was banana bread. My mother used to make quick breads all the time, especially banana bread with chocolate chips or nuts and zucchini bread with walnuts.

She has a tried-and-true recipe that requires an entire stick of butter and a lot of sugar.

I’m a big fan of any baking that does not require butter or only uses a small amount of it because, quite frankly, butter is expensive and I have a hard time remembering to buy it. Yogurt and fat-free sour cream are great healthier alternatives when I can remember to keep those on hand, too, but my favorite baking recipes are ones that use a small amount of canola oil instead.

I found a recipe for banana bread on Cooking Light’s web site last week (from 2000) that uses a small amount of vegetable oil instead of butter, but it seemed a little plain to me, so I doctored it up with a half teaspoon of vanilla extract and a half teaspoon of cinnamon. I upped the bananas from 2 medium-sized ones to 3 -- or 2 1/2 large ones. And I swapped the vegetable oil for canola.

The rule of thumb with recipes is that if you change three things about any given recipe, you can claim it as your own. In other ones, I’m taking credit for this one. I won’t take credit for putting in the cream of tartar, though.

Fun food fact: There are only three common foodstuffs that are alkaline: baking soda, egg whites, and milk (and probably several variations of milk and my guess is someone out there knows of at least one other uncommon alkaline food).

I couldn’t find much more information about cream of tartar except that it is a byproduct of winemaking, and its presence as a residue in ancient jugs found in Iran proves that wine has been around for 7,000 years. Who knew?

The recipe came out great. Be sure to set the bread pan on a cookie sheet to catch any overflow.

Combine oil and sugar. Beat with a mixer until smooth. Add egg substitute, egg, and vanilla extract. Beat until smooth.

Combine dry ingredients in a bowl, stirring with a whisk. In three batches, slowly add the flour mixture to the wet mixture, stirring to incorporate. Lastly, fold in the mashed bananas. Don’t worry about over-mixing. It’s not a big deal. The worst that will happen is the banana bits will sink to the bottom.

Spoon the batter into an 8x4-inch loaf pan coated with cooking spray.

Bake at 350° on a cookie sheet for 35 to 40 minutes or until a wooden pick inserted in center comes out clean. Don’t check on the bread too often or pull it out of the oven prematurely, as any serious cooling will result in the middle of the bread collapsing. It will still taste just fine, but it will have a big old saggy center. 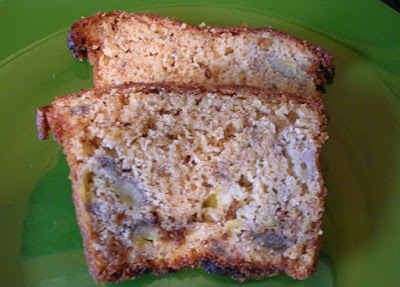