Bites and Bits in Florence, Italy

I've just returned from a four-day holiday in Florence (Firenze), where my friend and I needed to simply get away from the bitter cold of New York in January, take a break from work and school, and eat well. Here are some pictures of the little bits and bites we noshed along the way. (Photos of more substantial meals to come!) 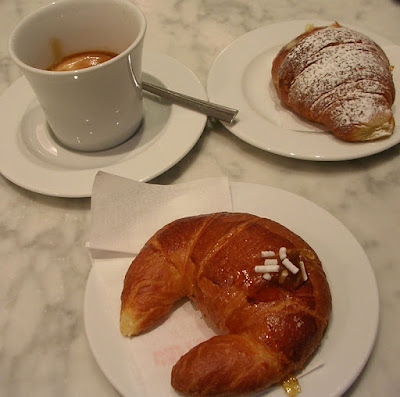 A typical breakfast: cafe doppio and an apricot pastry with little sugar crystals on top. The powdered sugar coated pastry, my friend's, was filled with a soft sweet cream. European portions are small. One pastry would have easily fit in the palm of my hand. 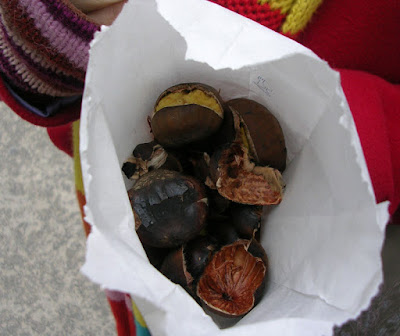 On Sunday, we walked through the street markets, dodging the locals who spilled out from the churches in the piazzas. A light rain and overcast sky was cut by the aroma of roasting chestnuts. My friend bought a huge bag of them for 7 euros (correction: 5 euros), and we nibbled the meat out of the shells, still quite warm, as we strolled along. 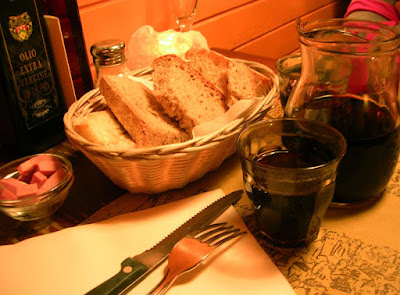 Two nights in a row, we had dinner at Borgo Antico in Piazza di Santo Spirito, south of the Arno and not far from Palazzo Pitti. We drank the carafe house wine by the half liter and dipped the Florentine bread (which is known for being made without salt) into fruity olive oil. All restaurants have bread and oil on the table. Borgo Antico's little twist is to provide a tiny glass dish with cubes of mortadella -- or at least I'm guessing it was mortadella -- a cured pork meat, served cold or at room temperature, from Bologna, which is just north of Florence. 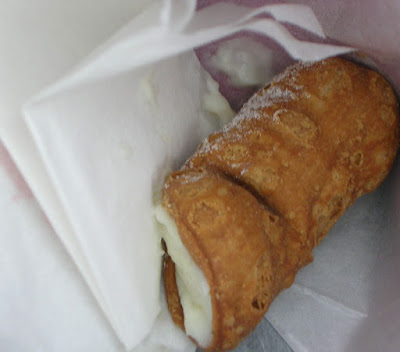 The night before we left, we walked by a few bakeries that had giant cannolis in their windows. The shells looked thick, and a single strip of orange peel adorned the open end where the filling showed. "I have to eat a cannoli before we leave!" I said. The next morning when we paid for our pastry breakfast, at about 8:30 in the morning, I asked the woman at the cafe if I could buy a cannoli for takeaway. "Cannolo?" she asked, politely teaching me the singular word form. "Si!" I said. "You want a small one or a big one?" she asked. I got the small, which was barely bigger than my thumb, the perfect portion size for tasting without feeling piggy. I saved it in my bag until we arrived at the airport and made it through security. Then I savored that last little bite of Italy.