I've been reading other people's blogs a lot more recently (I never used to) and have been trying to pay attention to what works.

My self-assessment is that I should be posting more photos, and also that readers like it when the blogger spills her heart on the page (or at least pretends to).

Wait. Do over! Let me take it from the top.

Here's a picture of me, happy, on a plane headed for Italy. 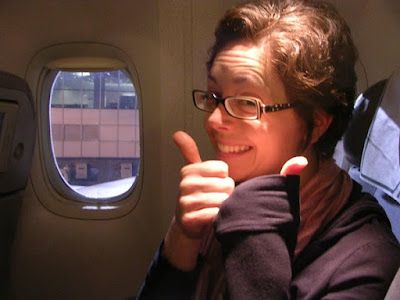 I have a Boyfriend, who is awesome, but being that I am not a needy person and I value my space, alone time, and independence, I most definitely never want to be married. I don't want him to hug me too much, either. No fooling, once a day is plenty. Also, I have commitment issues -- could you tell? -- so if he says, "I love you," too often, it kind of freaks me out. We've talked about it and have a good understanding of the situation.

So on this amazing trip to Italy, there was just me and my girl friend. Boyfriend stayed at home. He has a fairly new job and couldn't take any time off work yet, and he continually tells me how jealous he is that I was able to go. I don't blame him. He should be jealous.

Then again, when he traveled all around Europe for two months with his friend and went not only to Italy, but also to Prague, Berlin, and southern France, I was jealous. So there. Ha. We're not even yet, but it's close.


This is the food I ate on the flight from JFK to Rome on Al Italia. 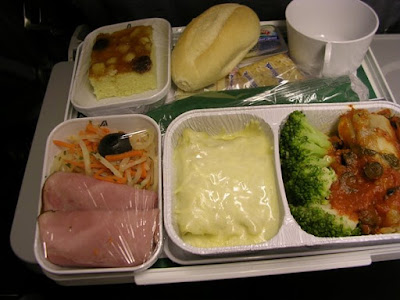 The main part of the meal is fish. I know it looks like a mess, but it wasn't half bad. If I had to guess, I'd say it was haddock. It was smothered in canned tomatoes and canned black olives.

The white lasagna stuff wasn't bad, either. I didn't eat the ham. I saved the dessert-looking thing for about four hours, thinking I might eat it later, but then I fell asleep and by the time I woke up, the flight attendants were serving another meal, so I tossed the cake.

David Sedaris, if I recall, once wrote about how when you take a trans-Atlantic flight, you eat dinner, fall asleep for a little while, and then at 3 o'clock in the morning -- or 9 a.m. local time at your destination -- the flight attendants bounce around the cabin with trays of breakfast, as if eating a cheese Danish at 3 a.m. is somehow going to trick your body into thinking it's morning and that you've had enough sleep.

Did I mention I don't ever want to be married or have children? Does that count for wearing my heart on my sleeve, to say that? Did you get the drift that, when it comes to airplane food, I'm not really all that picky? That I'll eat the stuff and like it? Did I mention, too, that popular bloggers don't always write in complete sentences or pay attention to proper punctuation? And no one cares?

I think I'll go back to my own style now.