The opera cake making adventure went pretty well, but it was very time consuming and expensive. A lot of things can go wrong, starting with finding ingredients. 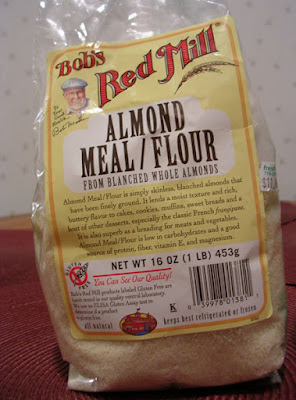 I went to three different stores in search of almond flour. In the end, I knew the organic market in my neighborhood would have it. I didn't know it was going to cost almost $12 for the one-pound package. I thought about grinding blanched almonds at home on my own but because I was making this very complicated recipe for the first time, I didn't really want to risk messing it up with a homemade concoction for one of the main ingredients. So I sucked it up and paid my 12 bucks. 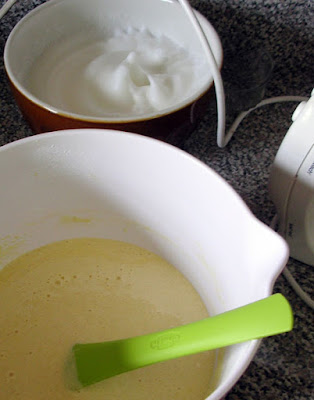 So far it sounds like making the jaconde layers was probably a pain, but in fact it was one of the easier steps. It certainly took less time than making the butter cream or the ganache did.

Jaconde is a thin cake, made with whipped egg whites and nut flour, baked at a high temperature for a short amount of time. The jaconde in the opera cake is an almond cake, made by folding the eggs whites into a very eggy, runny batter.

There's a scant amount of all-purpose flour, a good amount of powdered sugar (that's the "icing sugar") and an equal amount of the pricey almond flour, which had to be sifted. When I ran that through the mesh, I found that there were small pebbles of almond meal that were too big. I measured them off, set them aside, and poured out a new amount of almond flour to compensate. This was a little bit of a pain, but not too bad.

I whipped the whites and set them aside. Then I mixed the other ingredients separately. I folded the whites in and was ready to pour the mixture into my prepared pans. I used an offset spatula to achieve even, thin layers. 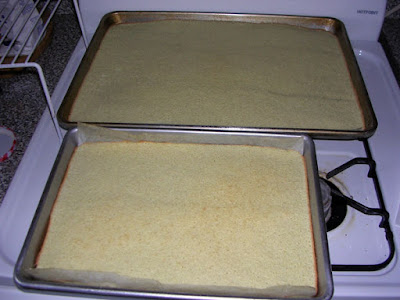 They took a little longer than the 5 to 8 minutes recommended by the recipe to look golden. 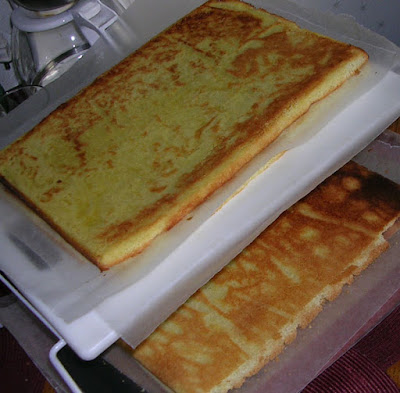 I took them out of the oven and let them cool a slightly. Because I needed to use the smaller pan again, I flipped that layer out while it was still warm.

The warm cake was a bit easier to turn out than the cooled cake. Even with the parchment paper and a good amount of butter greasing the pan, the cake clung to the parchment. One of the layers was particularly sticky. Very patiently, I peeled off the paper until I had my four cakes. Don't the bottoms (in the photo above, they are upside down) remind you of the blisters on a crepe? I cut the larger one into two pieces, making all the layers nearly the same size.

Later, when it was time to assemble the cake, I trimmed the cakes further and used a measuring tape to ensure they were all as uniformly shaped as I could get them.

Even with the parchment.

(For the recipe, see Opera Cake Part I: Preparation.)