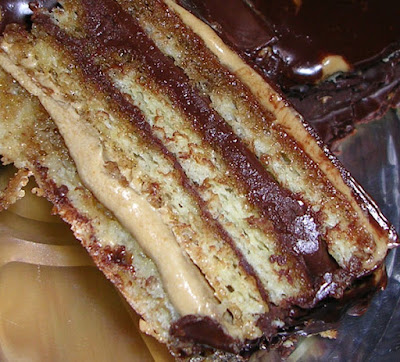 This is the third post about making an opera cake: making the fillings.

There are three fillings: coffee buttercream, ganache, coffee syrup. There's also a chocolate glaze for the top of the cake.

The coffee buttercream might be one of the best sweet things I've ever made in my life. It took a long time to make, but it came out gorgeously. Most buttercreams have a grittiness to them, usually because they contain shortening. This buttercream is all butter. It has eggs, too, and boiling sugar, and instant coffee.

Accidentally, I had espresso powder instead of coffee granules. It was a fortuitous error to say the least. I think that's the main reason the coffee buttercream came out so tasty. The instant espresso I have in the house is good stuff. This is not espresso that I bought specifically to bake with. I drink it.

I don't have many photos of the buttercream-making in action because it required both of my hands (I have only a hand-held mixer) and all of my attention. The most dangerous part is pouring the 255-degree boiling sugar syrup in a thin stream into a bowl of a eggs that are being whizzing around the bowl at high speed.

But this is how the buttercream looks before the espresso/coffee is added. 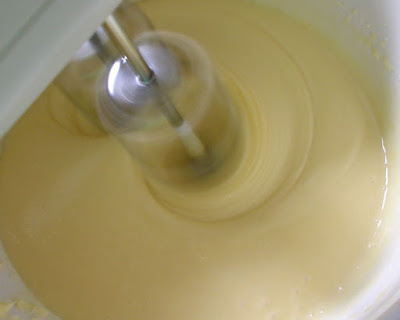 And this is the color after adding the flavor. 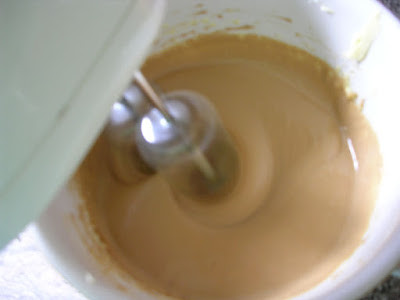 Making the other fillings was a breeze. A coffee syrup is used to moisten the cake layers, and it's nothing more than dissolving sugar and coffee/espresso powder in hot water.

The ganache was a snap, too. Ganache is an old friend of mine. When I used to work at a bakery and sweet shop in Buffalo, NY, in my college days (and about a year post-college), there were always ganache everywhere. Anytime you'd open a cabinet that was away from the heat, not near the stoves or the coffeemakers, there would be a bowl of this thick, fudgy stuff staring you in the face. The pastry chef would stash enormous metal bowls of ganache throughout the store, wherever he could find a few more inches of free space. We went through oodles and oodles of ganache daily. And I love it. It's just fat and chocolate. But it's divine. It's easy to spread. It keeps well. And it's hard to mess up making it. You just pour hot cream (in this case, a combination of cream and whole milk) over broken pieces of dark chocolate and add melted butter. You can also make it over a bain marie, but I think most home chefs use the heated cream method, which eliminates any possibility of burning or breaking the chocolate.

The final filling is actually the top coating of chocolate. I wasn't especially happy with the one in the recipe. It didn't come out glossy and luscious, though it tastes fine and set quickly and cleanly.

Tomorrow I'll finish with Part IV: Results, which will also give a little bit of background about how I got through the first 90 percent of this meticulously opera cake-making venture sober. The last 10 percent is another story.

Read the other posts in this series: