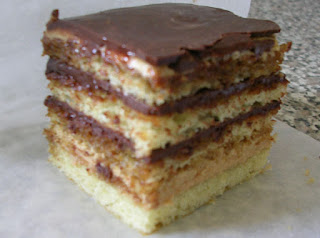 This is the last post in this four-part doozey of a series about opera cake. Making this cake took many long and difficult hours, so it's only fitting that blogging about it is equally arduous.

According to the recipe I used, I should have had three cake layers in my final product, but because I changed the dimensions of the cake itself, I decided to use four layers of cake, two with ganache and two with coffee buttercream.

One tool used in baking that a lot of causal home cooks don't ever think to use is a ruler or measuring tape. To get evenly sized cake layers with level edges, I trimmed my cakes and literally measured them while doing so. I remember one of the first times Boyfriend saw me measuring 1.5-inch square brownies with a ruler. He laughed out loud and then accused me of gunking up his ruler. ("I'm going to wash it," I replied.) That's how you get brownies that are all the same size and in nice portions.

There are other tricks to cutting, too. One is to use the rule of halves. This works especially well for cutting quick breads, like banana bread and zucchini bread. cut the loaf in half. Then cut those pieces in half. Repeat one more time to get 8 even slices. Or, after the first two cuts, switch to eye-balling thirds (a bit more difficult to do evenly) to get 12 slices.

One more trick to cutting: use a hot, clean knife every time you make a cut. In a professional kitchen, there's usually a tea tap available with near-boiling water on hand at all times, which bakers and servers will use to clean their knives before making a cut. But after that first cut, you need to wipe the knife or give it another few passes under the hot running tap, then dry it completely before making your next cut. When people cut birthday cakes and don't wipe the knife between cuts, it makes me batty. All those crumbs of cake and glumps of frosting smear all over the next slice, accumulating more cake chud until it snowballs into a monstrous ball of cake goo, wrecking the rest of the cake in the process.

Back to my cake: It's lovely. I've been eating it for three days and still want some more. I've shared it with Boyfriend of course, two friends, one of my sisters (The Eyes), and my mom. And there's still more to go around.

I also saved the trimmings from the jaconde and popped them into the freezer in a zip-top bag. Dipped in hot coffee straight from the freezer, they are wonderful for breakfast.