Postcard from Florence, Firenze, Italy: I Ate This

In late January, my friend and I went to Florence for a four-day getaway. Here are a few stories from our trip, told through food.

Pasta: Acqua al 2
The first night, we met up with another friend who was in Bologna for an art conference, so the three of us asked the concierge to phone in a reservation for us at Acqua al 2.

We each got a hefty green salad and a pasta dish. Mine was bowtie pasta with chopped grilled fish pieces, though they weren't fresh.

A second bowtie pasta dish, which looked identical to the first, was mixed with thinly sliced, long stemmed mushrooms and tasted much more delicate. Finally, there was a rotini pasta mixed with grilled fresh artichokes. 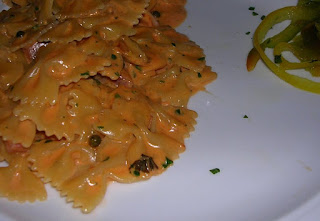 Florence doesn't have too many large corporate businesses, and restaurants have little signature elements, like placemats and almost always a house label on their wines, olive oils, and sometimes even vinegar. Who knows if they just make the labels and slap them on products that they buy from an outside provider or if they all are affiliate with a vineyard, and olive grower, etc. 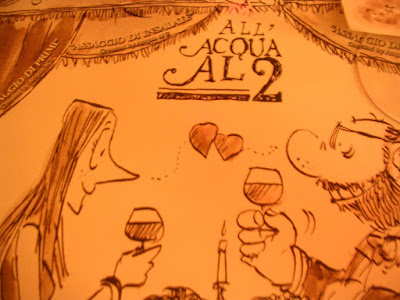 Soup's On in Siena
On a day trip to Siena, we stopped in a cafe for a multi-course, but light, lunch.

We had crostini with white beans and lardo, or cured pork back fat, bruscetta, and soup. I got pappa al pomodoro, which is simply tomatoes simmered into a soupy mixture and thickened with Florentine table bread, which is cooked into the soup until it begins to break down. My friend had ribollita, a traditional Tuscan soup that uses the same bread-thickening method, but contains two or three kinds of cabbages or dark greens, carrots, celery, beans, and other vegetables.


Pizza in Pig Square
We decided to dedicate one meal out to eating pizza. The pizzeria restaurant we went to was pretty unmemorable. If you know Florence at all, I can tell you that it was in the square that has the bronze boar fountain, Il Porcellino.

I ordered a pizza with eggplant (or "aubergines" to the Brits, and "melanzana" to the Italians). Eggplant is one of those menu ingredients that will seduce me into ordering something even if I don't like anything else in the description. If it said, "Disgusting popcorn with sunflower seeds in yucky sauce with eggplant," I'd say, "Oooh! Eggplant!" 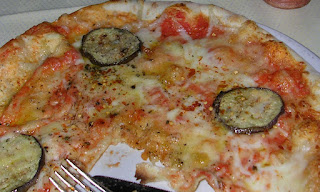 However, this eggplant pizza was woeful skimpy on the eggplant. 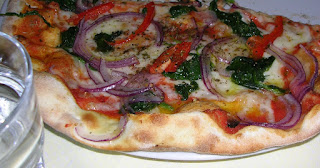 My friend got a pizza loaded with vegetables. As I've gotten older in my years, I've discovered the secret to great pizza is ordering it with red onions. Something magical happens when the blast of heat from the pizza oven hits those purple-flecked slivers of red onion, coaxing out their sweetness, which marries so well with dark tomato sauce and the dryness of a pizza crust.

Ooh La La-zy Lunch at ZaZa
"I want to take you to this one restaurant in particular for lunch one day," my friend told me one morning when we were planning our day. "It's got great salads. When I lived here as a student, I used always bring people to this place when they came to visit me here."

The long, lazy, and late lunch we had at Trattoria ZaZa definitely lived up to the high expectations I had for this place. I took an hour and a half to graze through this giant salad, studded with salty pecorino, dark raddichio leaves, and spicy radishes. 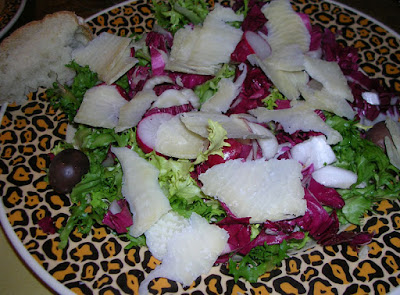 My friend had the ribollita served in an elegantly simple over-sized porcelain bowl. In this photo, you can nearly make out the authentic hand-drawn style placemats, similar to the ones we saw at Acqua al 2. 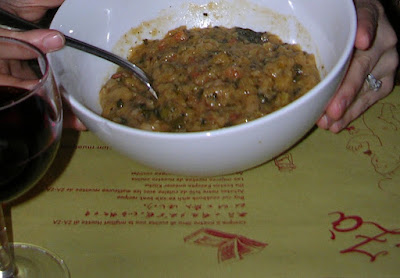 The Big Steak
Another restaurant recommendation from my friend was Borgo Antico, which we enjoyed so much we went there two nights in a row. The first visit will heretofore be known as Big Steak Night.

I don't eat steak. I generally steer clear of steer. From time to time I'll try it, and I won't turn my nose up at something made with beef stock, but generally speaking, I don't order or eat hunks of cow.

When I first decided to take this trip with my friend, Boyfriend got really jealous. "Promise me -- for me -- you'll at least try the Florentine steak while you're there?"

Boyfriend studied abroad in Florence one summer and fell in love with the city and its food. Florence, and in particular a region of Italy known as Chiana Valley, has a long history of butchery. Without going into too much detail here (read Bill Buford's Heat for a great overview of chianina cattle), basically, Tuscan meat is like none other. It comes from a particular breed of cattle. It's butchered totally differently than how any other culture does it. There actually is no international standardized way of or terminology for butchering, which is why you can't find certain cuts of meat in certain areas of the world. 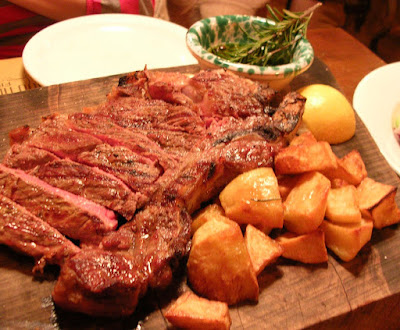 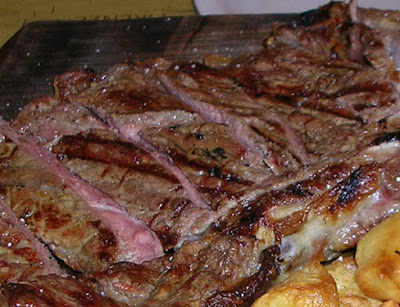 Anyway, we order a steak for two, a whopping 800 grams of it, though that weight includes the bone. Apparently, it was an amazing steak. "I'm still thinking about that steak from last night," my friend confessed at about 9:30 the next morning. "If we hadn't been in a public place in a foreign country, I would have gnawed the bone!"

Which is how we ended up at Borgo Antico again the next night.

However good that steak was, I really wanted to try something different. I got pork ragu with leeks over polenta, hearty and warm on a winter night. 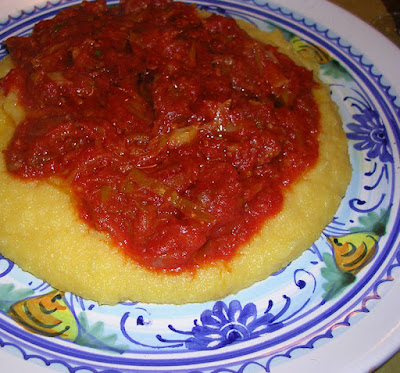 My friend got a grilled chicken dish. She practically ate it in tears because she was so sad to not be eating one-and-three-quarter-pound steak. 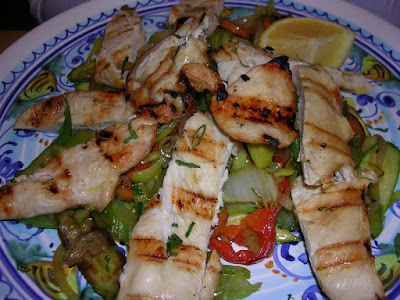 We're So Classy
My favorite moment during this trip was the night my friend (in the monkey shirt) and I got a decent bottle of Nobile de Montepulciano wine (about 12 euros, I think), which is predominately made from sangiovese grapes, I've since learned. We drank it in our hotel while talking over Japanese children's cartoons dubbed into Italian blinking neurotically on the television set. 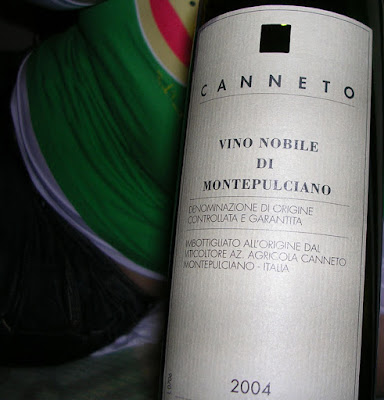 The first night we got there, we had tried to do something similar, only with a 4 euro bottle of chianti, which tasted like sangria, like there were chunks of food in it (I have a thing against chewing my wine), and some nasty thick-plastic cups provided by the hotel.

"These cups make the wine taste awful! I'm going to do something about that," I said. I took a disposable water bottle and, using the knife on my corkscrew, sliced the top half of it off. "Much better," I said, taking care not to poke myself on the impromptu cup's jagged lip.