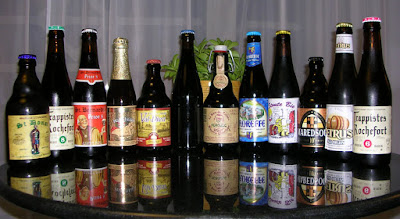 Last night I was cleaning up some files on my computer and found this photo from 2006. It was taken while on a trip to Brussels and marks the moment I first really got into beer. The filename I had assigned to the picture was 0906_BeerLineup_Brussels.

While planning the trip, Boyfriend and I had decided to spend about half our time in Belgium and the other half in Paris, with one day in Reykjavik. We had both been to France before, and I had been to Iceland, so Belgium was the main point of interest in terms of exploring a new place.

Our friends sometimes ask, "Why did you ever decide to go to Belgium? What's there to see?" The most truthful answer is we went for the beer and chocolate. Sure, we were interested in finding out how Brussels, the capital of the EU, felt in comparison to Washington, D.C. We had read about Brugges, a tiny village whose Medieval architecture survived the war. And on a subsequent trip, we ventured north to the trading city of Antwerp to find it's still one of the largest shopping districts in all of Europe. But the first time around, the primary draw was beer and chocolate.

I had read about a specialty shop called Beer Mania, and we set aside an afternoon to find it and really sink our teeth into some new brews. We browsed the shelves, talked to one of the employees and went back to the hotel carrying these 12 bottles and a Chimay goblet. We've since begun collecting beer glassware, too, and the Chimay glass was the first in that collection.

The only beer from this lineup that we still drink with any regularity is Maredsous. There's another that we would drink regularly if it weren't so rare and expensive, and that's the one without a label. It's a Westvleteren, one of the six true Belgian Trappist beers. (There are eight Trappist monasteries that brew beer, but only six are Belgian. The others are in The Netherlands and Germany, and the one in Germany is not allowed to use the Trappist logo on its beer. The abbey in The Netherlands was contested for a couple of years.) Not long before our trip to Brussels, Westvleteren had been named the best beer in the world by an American magazine (overtaking Chimay), driving up the price to an absurd amount. We paid 12 euros for this one bottle. The monks who make Westvleteren refuse to produce more than a certain quantity, which explains why the price skyrocketed.

The guy at Beer Mania explained that Westvleteren has never had a label. The bottle cap is the identifier. However, he said a few cases a year are exported to Canada, where laws require beer to have a label, so the monks made one up just for the stuff that's exported there.