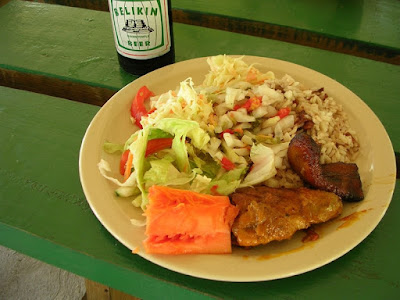 Andre, the guide who took us into the interior of Belize to see Mayan ruins at the site known as Lamanai had brought lunch. He and his partner laid out a spread of plastic containers on a set of picnic tables just on the edge of the jungle. Behind us was a wide and placid lagoon, the docking point for the motor boat that had taken us upriver The thatch on the gazebo barely rustled because the air was still inland, unlike the strong and persistent Caribbean breeze out by the ocean and on the islands.

One by one, the travelers lined up to fill their plates with food, buffet-style. I scooped some of the rice and beans onto my plate, nestled a piece of stewed chicken next to it, added a sweet hunk of plantain, dabbled in the coleslaw, tossed on some shredded lettuce salad and papaya spears, and topped it off with a chunky onion salsa that we had been warned might be too hot for some people's palates.

When everyone was ready to tuck in, I asked Andre and his partner about the rice and beans. The night before I had eaten them in a restaurant and fell in love. Unlike other rice and beans, which are served separate, with the beans in a thick slurry of their own sauce, this dish was fully united as one. The was more rice than beans -- black beans -- but they were all the same consistency and uniformly integrated.

But there was a flavor in there, too, something new. At the restaurant the night before, it took me a few bites before discerning it was coconut. But it didn't taste like cream of coconut or coconut milk, exactly. Did they use coconut water to cook the rice? Or maybe it was a combination of coconut water and milk?

Now, I had a chance to ask. 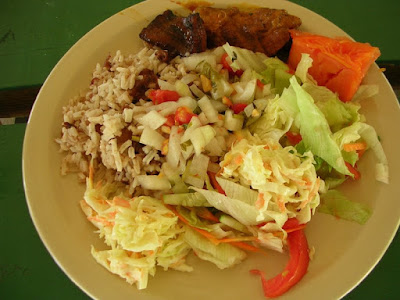 "We're going to have the national dish of Belize: rice and beans, plantains, and mystery meat."

They told me that in Belize, people go out into their lawns and pick up a ripe coconut from the ground -- coconuts are that plentiful. The coconut is split open, and the liquid is reserved. Then the insides of the coconut are scraped out and ground and mashed by hand together with the liquid. The mixture is then rung out in cheesecloth, and the result is what's used to cook the rice and beans.

They also told me, "It's never 'beans and rice' or 'rice with beans,' but always, 'rice-and-beans,' more rice than beans."

I attempted an approximation of the Belizean rice and beans at home using half coconut milk and half water, white rice, and black beans (from dried). It came out much stickier and wetter than I would have liked, but wasn't half bad.