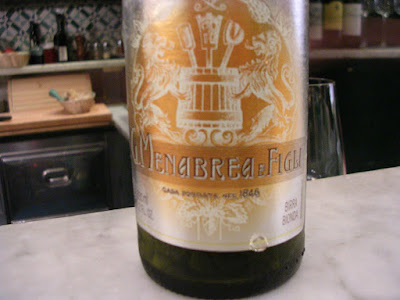 I drank some of this beer from a microbrewery in Italy. Its name? That's anyone's guess.

I was listening to an NPR show about birding a few weeks back (wow; I am the dorkiest person I know), which is how I found out what a "life list" is.

In birding, or bird-watching, a life list is a cumulative list of all the birds one has spotted and identified oneself, in the wild, unaided. Any bird species seen in a zoo or that has been pointed out by a tour guide or other birder does not count.

I'm thinking about adopting the concept of keeping a life list for all the beers I've tried. Beers pushed on me by others won't count, but those I've picked up on a whim will.

Boyfriend and I will sometimes flip through a beer book, magazine, or list to see how many we've tried, and it's really frustrating to find beers that we know we've heard of, and we know we've seen with our own eyes, but we can't remember if we actually ever tasted them. Or, sometimes we know we've had it, but we don't remember anything about it. The other days, for example I said,, "We've had Delirium Noctura before, right? What's the difference between that at Tremens?" And neither of us could recall.

I doubt I would actually keep a journal to document all the beers I drink. It would be handier if I had a decent phone on my camera, but I don't.