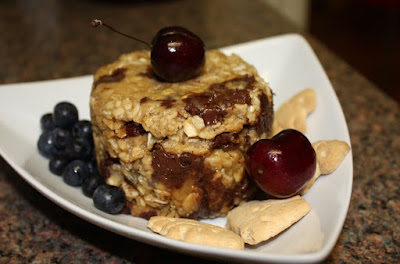 "Would you guys care for any dessert?"

We were cheering and hollering. "It's cookie pâté time!" High-fives were connecting one after the other across the table. Never had we been so excited to accept a waitress's final push for dessert as the night we were in a hipster pizzeria in Bushwick, Brooklyn, and saw written on the specials board, "cookie pate."

"What do you think it is?" we asked one another when we first arrived. "Do you think it's just raw cookie dough, and if so, what kind?"

"I love cookie dough! Wait. What do you think you eat with it?"

This was really exciting stuff.

When we unleashed our joy about cookie pâté to the waitress, she stared blankly at us, and blinked three or four times. She wrote nothing down. Something was wrong.

"Oh," she finally said, "you mean the cookie plate?"

Needless to say, there were looks of shock, horror, disappointment, regret, like a disheartened sadness in the eyes like when a child is denied a treat after struggling all day to be ever so good. No, we did not mean a "plate" of cookies! What the hell is the point of going to a hipster pizzeria in Bushwick if you don't even have the option of ordering deconstructed nostalgia food?

After the letdown and recovery period involving a bland pile of strawberry shortcake, those of us at the dinner -- me, Boyfriend, Googly, and Squirt's Husband -- decided that we would invent cookie pâté, and have a showdown to determine the winning creation.

A few weeks passed during which time I sketched concepts of my cookie pâté. A classic cookie pâté would be mostly chocolate chip cookie dough, with pieces of chopped biscotti scattered through the bottom third for added texture. Another variation involved under-baked brownies, a layer of Nutella, and a frozen dome of strawberry ice cream held in place with a firmed up coating of dark chocolate. Another idea would involve four different kinds of cookie dough, all layered in vertical strips: double chocolate chip, chocolate chip, peanut butter, and oatmeal.

I wrote long lists of possible ingredients and used different symbols to note which ones would add texture (biscotti, nuts, streusel), a balance to the sweetness (espresso beans, pretzel pieces), and color (a peanut butter stripe, a raspberry jam swirl).

A week before the main event, I asked Boyfriend if he wanted to submit an entry. He did, but needed help making it. "All right," I said, "you come up with the concept. I'll sketch it and make it." His involved half-baked oatmeal chocolate chip cookies and half-baked brownies, layered and smooshed together, with a bit of crème anglaise on the plate and a single raspberry. (Those two last items didn't make it into the final creation, but instead he had blueberries and a few dark cherries.)

Two days before the big showdown, I prepped two doughs so they would have time to rest and let the butter meld: one oatmeal chocolate chip and one standard chocolate chip, but with far less flour than usual. And it was a good thing that I did because when the day finally came, I was unexpectedly extremely busy with about ten other things and hardly had any time at all to assemble our dessert novelties. It was the very same day, I should note, that Michael Jackson and Farah Fawcett died.

In the end, there were four participants, but about seven entries, on account of Squirt's display, "cookie pâté three ways." 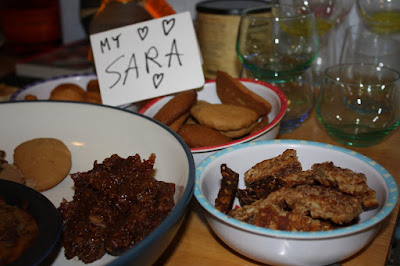 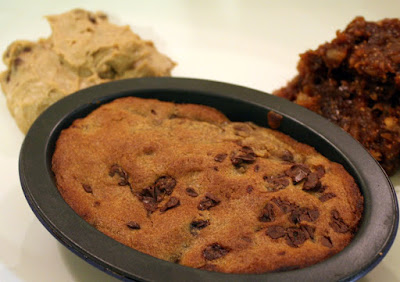 Squirt's mousse is in the background, left, the fig jam background right, and old-fashioned pâté is in the foreground. 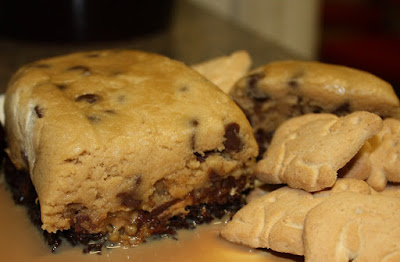 My pâté (above) consisted of a half-baked brownie bottom, lightly soaked in Godiva liqueur (which was a mistake; it was too boozy and too sweet), a thin layer of creamy peanut butter, and flour-light chocolate chip cookie dough. I served it with arrowroot animal crackers, which I chose for three reasons: 1) heft, meaning they wouldn't break if a scoop of cookie dough were smeared on them, 2) their connection to childhood, and 3) they are cookies, but aren't very sweet. 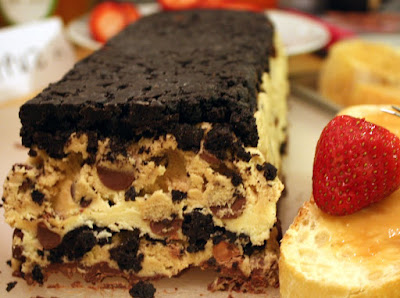 Googly's presentation consisted of cookie "pâté de campagne," with homemade caramel on toasts and strawberry "cornichons" in mojito "pickle." The pâté, which was the size of a yule log, had milk chocolate on the bottom, chocolate chip cookie dough, sugar cookie dough, and Oreo crumble on top. 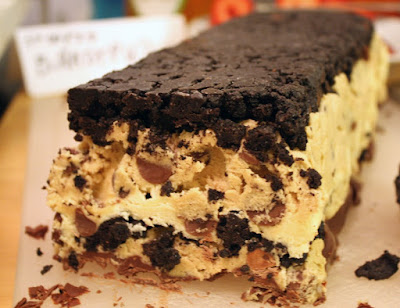 Googly's entry won for the category "Most likely to show up on the menu at Applebee's."


See also the Crazy Cobbled Cookies I made with the left over dough!