Dishwashers, Knives, and My One Kitchen Rule 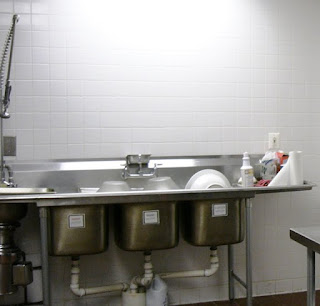 Being the irritable person that I sometimes am, I am forever pissed off when I hear cooks, amateur and professional alike, share their "number one rule of the kitchen" or "the absolute first thing one learns in cooking school."

It's usually something like, "Never ever use curly parsley for anything other than garnish!" or, "Don't zest a lemon farther than its pith or the whole fucking world will collapse all around you!" or, "Always de-seed tomatoes, especially if they are for a sauce!" (The exclamation point is not warranted in any of those statements, but it will sound as if it belongs there when they say it.)

All these rules are picky and finnicky and have nothing whatsoever to do with being in a kitchen.

But of course, I have a number one rule.

In fact, it's my only true rule. I learned it very early on in two professional kitchens, and it's a rule I keep at home, too: Never put a knife in the sink.

Behind the scenes where people like you and I actually eat somewhat regularly—so, excluding high-end hotel restaurants and star-rated fine dining establishments—the cooks in the kitchen do not own their own gorgeous set of knives that they cart around in their very own knife roll. They come to work and find "the sharp knife" or the one they like best. And when they go home at night, the knife stays in the kitchen.

If you've never worked in food service, and especially if you spend significant amounts of time watching television shows that glamorize life in a kitchen, here's another little something that maybe you don't know or wouldn't ever think about: Who washes the dishes?

If the establishment has a machine dishwasher for flatware and whatnot, in all likelihood, it still has on staff a pots-and-pans guy, who might also be a line cook, a busboy, or someone else in the rank-and-file. But it's not uncommon to have one person who, during the rush, is the dishwasher and that's the only job he does. Maybe he cleans after hours, too, but his main job is to stand over a stinking sink, his shoes sloshed with water, maybe even wearing a gigantic rubber apron, which drips with rank in the 95-degree steam. When the high-pressure sink sprayer is on, he can't hear much above the hose and thus can't communicate as well with the rest of the staff, can't hear the music, and becomes almost secluded.

Who in their right mind would want this kind of job, you might ask. From my experience, there are two kinds of people who are dishwashers, aside from the occasional college student on summer break: ex-cons and the mentally disabled.

So that's the set up. You've got an ex-con or mentally disabled person working in awful conditions, taking in minimum wage, paid hourly, in the stress of a busy kitchen, and yet at the same time cut off from human contact.

Now—go ahead; I dare you—put a knife in his sink.

Probably, there is more than one sink, and the first one at least is filled with murky water. Aluminum containers are submerged like sunken ships, tilted to one side, haphazard in their descent. Two-foot long slotted spoons dart out from between the crevices. A wisp of slimy bubbles floats across the surface, like seagulls bobbing on the ocean waves.

The dishwasher, forever in a state of haste, jams his hand into the sink rubble and pulls out objects based on relative size and shape in search of whatever the kitchen is out of at that moment.

Keeping in mind that this person is either a former inmate or unstable in the head (or both), let me reassure you, if you haven't caught on by now, that he is the last person you want to piss off. You know what would piss him off most? If he jammed his hand into the sink in search of another 1-quart container and instead speared himself on a knife.

Dirty knives get laid next to the sink in a position where they won't slip in, and with the blade tip toward the wall. Some people will stand the knives, handle up, in a bucket near the sink, and that works, too, except it can damage the tip (provided the knives are in good enough condition to be damaged).

'Who's the Ex-Con or Loon at Your House, Jill?'
I may not have any felons rinsing my utensils at home, but I do enforce the "no knives in the sink" rule. Generally, I clean my chef's knife when I finish using it, or if I'm not sure whether I'm done, I leave it out on the cutting board, tip pointed toward the wall. The cutting board and the knife are a pair, and they are allowed to be out on the counter or the table or wherever, so long as they are not in the sink. (The wood cutting board also never goes in the sink.)