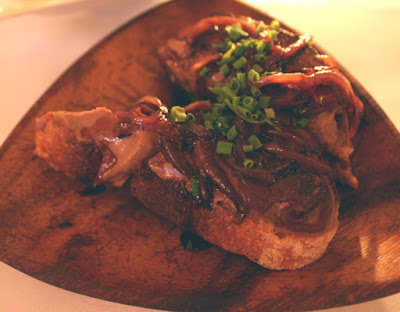 Since dining at Convivio a few weeks ago, I’ve thought a lot about the difference between 1) dishes that are inventive and well prepared, and 2) food that one wants to eat.

I’ve become part of a trio who searches out fine dining establishments in New York, sets a date, and eats at one of the city’s nicest restaurants once every six weeks or so. We went to Nougatine, along with a few others, during Restaurant Week a couple of months ago. In early summer, we set out for Harbour. And Convivio, Michael White’s rustic Italian restaurant, was our most recent affair. 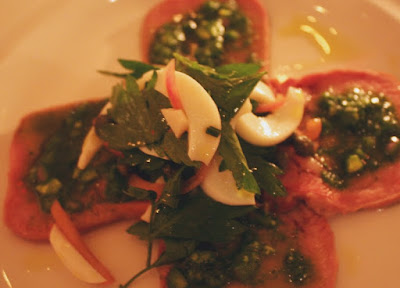 Convivio’s Location
It’s impossible to talk about Convivio without explaining its location, which despite being in a grid section of Manhattan (East 43rd Street near First Avenue), can be extremely hard to find, especially if you happen to approach it from the wrong angle. The restaurant is in Tudor City, a miniscule neighborhood, which I had never even heard of until I started reading about Convivio, that’s nearly next door to the United Nations, but is elevated from the street level on the U.N. side. If you try to enter Tudor City from the east, you’ll hit a gigantic wall. Search for the stairs, climb two flights up, and only then will you be in Tudor City.

Dinner
The three of us who ate at Convivio were there for the $59 four-course pre fixe: antipasti, primi, secondi, and dessert. Another friend recommended we add on a few sfizi, or little tastes and nibbles to share, just to try them, saying the extra $4-$7 per dish was money well spent.

Fegatini ($5, shown at top), or chicken liver mousse crostini with marsala onions, was on all our minds, and when we ordered it, the server talked us into getting two portions. It was the best he’d ever had, he said, and one order only came with two toasts. Once we tasted it, we’d want at least one slice each. So be it. He was right. They were extremely rich, buttery, sweet, and heavy, and had there been more than two bites per person, it might have been a problem. The arancini, saffron risotto croquettes ($5), though lighter and served in a pale tomato sauce, lacked flavor from top to bottom.

The three of us who dine together devise a game plan as we go over the menu, making sure we each order something different. When the food comes, we swap plates, trade forkfuls of one thing for another, and scoop out mini portions onto each other’s bread plate to make sure we all try everything. A four-course meal can get a little nutty: 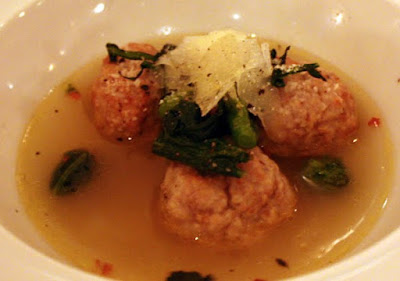 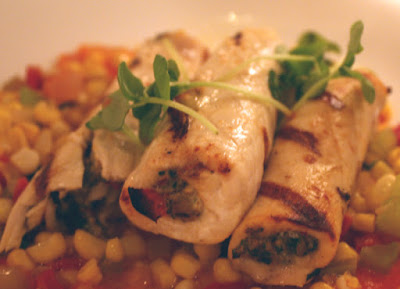 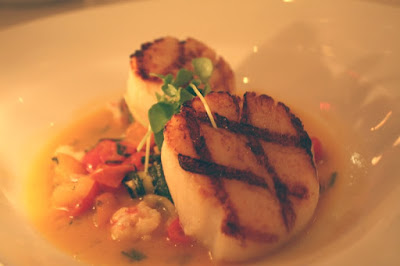 Dessert
*As we talked to our server, asked questions, and showed interest in the quality of ingredients and preparation of the desserts, he seemed to become convinced that there were a few of them we should definitely try, and so he brought us more at no charge.

Two concoctions from our menu got me to thinking about the difference between food that is well prepared and food that I actually want to eat: the pasta with rabbit ragu and smoked cheese and the grilled swordfish rolls.

The pasta dish wasn’t at all what I expected based on the description. I tend to think of ragus as being tomato-based (with meat), but this one was all cream, butter, maybe white wine. Its flavors were condensed. All the flavors were really cooked in there. It was broiled lightly to be golden on top, giving it an even more buttery sheen. When I asked what scamaorza was, I learned it was an aggressively smoky cheese. I like smoked cheeses. I like rabbit. I love pasta. I really enjoy fava beans, especially when they are left whole—I think firm beans that are on the larger side, like kidney, cannellini, and fava, are fun to eat because they are fun to find and fun to pick up with your fingers or chase with a fork). But I tend to dislike pastas that are sauced as if, as I put it, they were meant to be had with white wine. 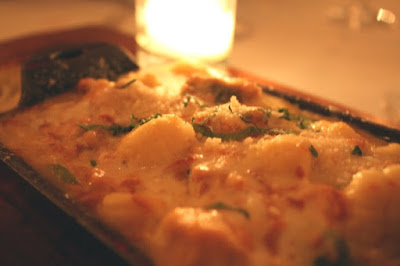 There’s no doubt that the cavatelli al forno was an artfully prepared dish, visually appealing and with wafting aromas. Maybe it even smelled too good. But the density and concentration of flavors made it difficult to eat in human-sized bites. I had to nibble my way through it, like the very rabbit I was eating, pecking and poking to find little hunks of bunny, a cube of scamaorza, or the pale hue green of a fava bean hidden among the mass of flavor. Pretty, interesting, and even well prepared food isn’t always something one wants to eat.

On the other hand, the swordfish dish was idyllically rustic, with bold flavors of corn, red pepper, and pesto all competing for my attention, layered rather than melding. It wasn’t refined cooking at its height, but it tasted good and I every time I took a bite, I wanted to take another bite. 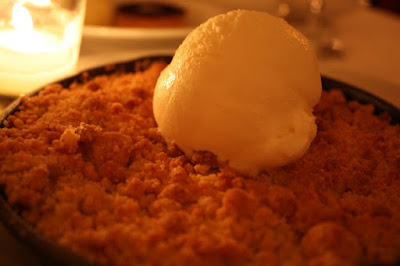