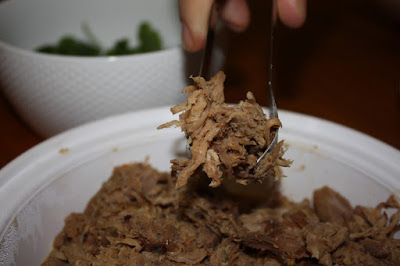 "I'm braising a pig’s shoulder for you!"

"Well," I say, trailing, as he freezes, mid high-five. "We are eating it for dinner, but not tonight. It takes eight hours to cook and a day to cool. So, we can eat it in two days."

He slunks, hangs his head, and turns to retreat to the couch.

How to Braise a Hunk of Pork
Step 1: Marinate
I started with a 5.5-pound piece of bone-in pork shoulder, which had a thick layer of skin and fat on one side.

First, I made a viscous marinade with about 2 tablespoons of Korean red pepper paste, a teaspoon or so of sesame oil, a few more teaspoons of olive oil, table salt, a pinch of black pepper, a few tablespoons of water just to thin it out.

Then I rubbed my washed and still wet hands all over the pork skin and meat to make sure there was nothing odd on it, like a shard of bone or prickly hair. I didn’t want to fully rinse the meat, but I did want to check it once over. Using my fingers and a small fork, I loosened some of the skin away from the meat where the shoulder joint was, and where there was less fat, and smeared some of the marinade inside. I coated the whole thing generously, using my hands and fingertips to massage it in.

The shoulder was then placed in a plastic bag containing one rough-chopped onion, a small head of garlic, peeled and separated, several dried bay leaves, and several stalks of celery with the leafy parts still attached. I left this in the refrigerator for a couple of hours.

Step 2: Sear
Next, I heated an enamel cast-iron Dutch oven on the stove top over a medium-high flame, while simultaneously bringing a few cups of water to a boil and preheating the oven to 250 Fahrenheit. The shoulder just barely fit in, skin side down. I like brown a bit until I heard a few nasty “pop!”s, then turned it over to brown some of the meat. When that also began to sound agitated, I laid the vegetables from the marinade into the pot, nestling them all around the pork.

The only problem with this method is that the direct heat made the red pepper paste go airborne, leaving me and my houseguest hacking and coughing for 20 minutes until it dissipated. When will I ever learn not to use hot pepper items in a dry and open pan?

Before sealing the Dutch oven with its heavy lid, I added the nearly boiling water as the braising liquid. My theory was that all the vegetables, as well as the juices from the pork and the marinade itself, would create a stock flavorful enough for me to get by with using water and not broth or another stock. Plus, I didn’t have any and when I went to the store earlier in the day, I didn’t have enough room in my bags to carry home one more thing.

After an hour or two, I checked the level of the liquid and topped it off with another 4 cups or so of boiling water, then lowered the temperature to about 220 F. It’s especially important to use hot liquid when braising because the temperature in the oven is low, and adding cool or even room-temperature water would quickly lower the temperature of the food and cooking vessel, essentially halting your cooking process.

Being skin-side up, the fat from the pork was melting into the meat, and the skin, which was above the liquid, had developed a beautiful browned crust.

Step 3: Rest (both you and the pig)
After 5 hours, I needed to get to bed, but I was really hoping to get a full 8 hours of cooking time in on this pork shoulder. So, I turned off the oven but left the pot in there. Seven hours later when I woke up, it was still warm to the touch. That’s when I moved it to the refrigerator to rest until later that night.

Step 4: Skim-n-Trim
The pig piece spent the day in the refrigerator, still in the Dutch oven. That evening, I removed the lid and found a ring of bright orange encircling the meat. It was fat, and it was stained with the red pepper paste. It had also separated cleanly from all the other gelled liquids and solids underneath, the stuff that would later become a sauce.

Taking advantage of the cool temperature of the fat, I used a fork to lift it away in large swaths. It came right up, neatly and cleanly.

There were more things I wanted to strain from the pot, like all those celery stalks, which were now stringy and soggy, and the bay leaves. To strain it, I would first have to reliquify everything — except of course the pork. 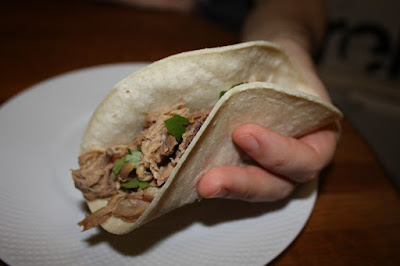 Step 5: Reheat and Shred
Back on the stovetop burner went the pot, over a low to medium flame. I jiggled and stirred until the bottom contents turned back into a sauce, at which point I tasted it and decided to add another three cups of hot water.

When it was all looking like a hot meal again, I hoisted the pork shoulder gently from the pot and set it on a jelly roll pan to remove the bone, sheet of fat, and other inedible bits. That's also the point at which I strained the sauce and returned about half of it to a simmer, reserving the other half for another time.

The piece of meat was so big, the insides were still cold when I began shredding the meat with a fork. Little by little, shred by shred, I returned the meat to the pot and let it reheat in the juices. When it was all done and everything was hot again, I turned it off, put the lid on, and waited for my friends to come over.

Step 6: Plate
Considering how aromatic the marinade was, almost all the finished product tasted cleanly porky and not at all like sesame oil or that lovely, sticky pepper paste. It was a bit of a shame because I was planning on having these slightly Asian-infused tacos, but what we got was more like typical pibil, which no one had a problem with whatsoever.

We ate the pork shoulder as tacos on soft corn tortillas with cilantro, avocado, diced red onion, black beans, Belizean hot sauce, and a squeeze of lime. Four hungry people didn't even eat half of it, so there's plenty left over now for — well, the hardest part is deciding what.