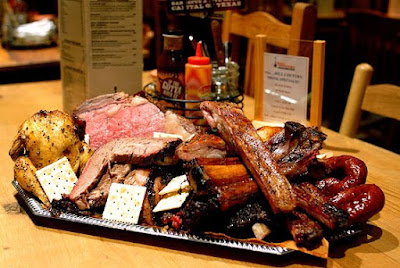 Never has meat clung so fearfully to bone. Perhaps it was afraid of heat without smoke, of a cooking process that seized up its muscle without injecting or coaxing out any flavor whatsoever.

I don’t like to write negatively of a place where I’ve only eaten once, but I tried a lot of food at Hill Country, and all of it missed the mark. Hill Country is an utter failure in Texas-style barbecue, greasy, odorous, and sure to perpetuate any bad stereotypes New Yorkers—or maybe I should just say “I”—have about the lone star state.

A complimentary bite of brisket wielded a soft and edible texture. Two or three giant beef ribs, at $5.99, however, were $5’s worth of bone and $0.99’s worth of gristle. An equally tough on-bone piece of pork ($3.24) was all peppercorn and oil, with little other flavor. I gnawed through what I could and threw the rest away. Corn pudding was gummy below a crust that was more like dried paste, a disgusting insult to the near $5 price.

Instead of natural meat juices, there is oil, and a lot of it. The roll of paper towels supplied on each table does little to cut through the slick. I tried to use only utensils to eat, yet somehow, the oil seeped upward onto the very handles of my knife and fork. It was everywhere. There was no escape. I felt like I had oil in my sleeves.

Happily, there was white bread, which I used to sponge up various vinegar-based sauces to tide me over.

What amazed me most of all were the dedicated patrons. I overheard two separate dupes in suits telling their lunch buddies while they waited in line, “Just wait! This place is awesome!” Perhaps in the world of bankers and lawyers, there is some pleasure in snarling over bones.