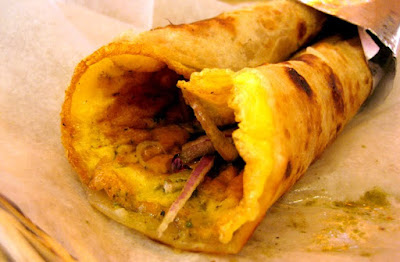 Image borrowed from The Eaten Path.

When lines of busy people start pouring out of a midtown Manhattan lunch spot, it definitely piques my interest. And that's how I found The Kati Roll Company, a little fast-food-fresh restaurant that serves what many describe as "Indian burritos." I just happened to be walking by on 39th Street between 5th and 6th Avenues and saw dozens of people ducking in and out of this brightly orange-colored place. Some were tottering slowly out the door, having just eaten. Some were scurrying along, paper bag in hand stuffed with Kati rolls in hand.

The restaurant itself is nothing to behold, and the menu listings are intentionally over simplified with pictograms of the main ingredient in your kati roll:

And that's it. No daal. No raita. No pakora. If it's any consolation, you can have a bottled drink, but no alcohol.

I like the austerity of the menu. I also appreciate that what actually comes inside the kati roll is ten times more interesting than "chicken and egg" (which was what I ordered; $5.75).

The chicken, which is char grilled kabob-style, was moist at every bite. The flat breads used for the wraps are grilled on a flat-top, visible behind the counter, and were slightly over oiled, but deliciously tender and warm.

I'm excited to go back and try the egg or "unda" kati roll, as well as the paneer (a fresh farmer's cheese that's similar in appearance to tofu) and potatoes.

Additional locations at 99 MacDougal Street in Manhattan, and in London at 24 Poland Street.