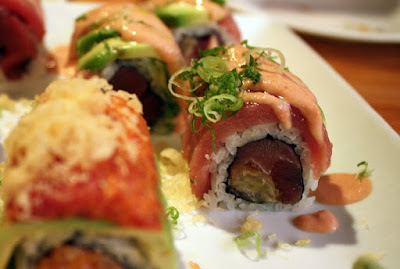 There's a tradition that says a bride and groom are supposed to save the top tier of their wedding cake and eat it on their first anniversary.

Last week, two of my closest friends celebrated their one-year anniversary. Their cake was swaddled in seven layers of plastic wrap and aluminum foil at their bride's mother's house.

A few days before their anniversary, I got this email:

"Ok, so i just got a crazy idea, and i'll understand if it's too last minute for y'alls but here it is: G and I are running out to L.I. tonight to pick up the year-old frozen cake. I thought maybe you'd like to come along and we can have dinner at Azuma." She added, "You of course might have already planned out your evening, which I totally understand. But you're totes invited to ours after for year-old cake anyways. (just kidding)."

I had been to Azuma once or twice before with my mother, who lives around the corner from the bride's mother.

It's not the most amazing restaurant by any means, but for that area, a suburban neighborhood, it's one of the more interesting places to nosh.

Azuma is your standard Japanese-with-a-touch-of-Asian-fusion restaurant, the kind of place that could have focused just on Japanese food, or just on sushi, or just on specialty rolls, but for its location and clientele. 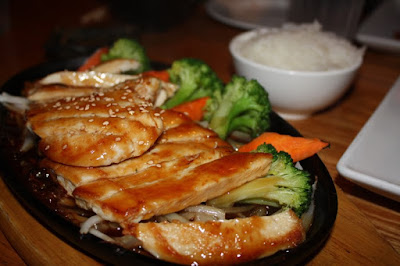 I imagine Azuma attracting an adventurous eater who lives nearby, but who also needs to convince his mother, wife, kids, or father-in-law — who happen to shutter at the thought of eating raw fish — to dine out with him. I imagine a middle-aged man who is enamored with the idea of eating a bright purple nugget of yellow tail side-by-side with warm banana, but whose wife demands, "What am I going to eat there?" Maybe he replies, "Honey, they have chicken teriyaki!" ($13) the most prominently displayed non-sushi dinner on the menu. Everyone's happy!

The first time I went to Azuma three or four years ago, I remember it vividly because it was my introduction to scallops served raw. Giant sea scallops are by far my favorite seafood, and a major part of my love for them has to do with texture. So to slurp at their buttery flesh, doused in a light and clear sauce, adorned with a streak of seaweed salad (another food that I swoon over) flecked with red pepper, and served in the shallow bed of a saucer-sized scallop shell was memorable. Ever since that experience, I have been on the hunt for a restaurant item that features raw scallops: ceviche, sushi, on the half shell.

My mother on that visit ordered a special roll called something like "snowy mountain," if I recall. It was your standard California roll buried in a haystack of shredded coconut and panko, which stuck to the roll via Japanese mayo. 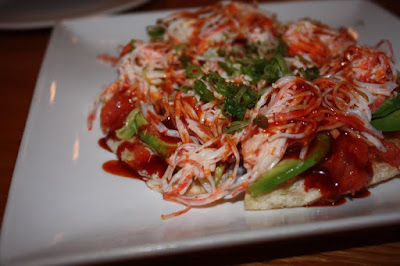 On this most recent visit, a few of us shared a couple of things. The special tuna pizza, hastily designed, was a mess and a disaster in flavor profile: a Styrofoam matzoh-like flatbread, layers of sliced avocado, imitation crab meat shredded and piled atop and smothered in some kind of deep red barbecue sauce, with a scallion chiffonade garnish, which would not be its saving grace no matter how deftly sliced.

Much better, though surprisingly bland, were two special rolls not on the online menu. One, called "spicy girl," featuring salmon, lacked any spice or heat. The other, a tuna and banana roll, could have hit the mark, but seemed unseasoned, as if the vinegar had been left out of the rice. As I've become more attuned to sushi, I've slowly moved away from using wasabi and soy sauce to seek out the delicate essence of fish and other ingredients. However, these rolls needed something to punch them up. Dunk I did.

And, I did not eat the cake. 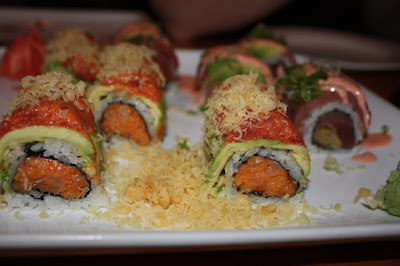