I Ate This in 2009: Favorite NYC Restaurant, Favorite Chocolate, Highlights of the Year 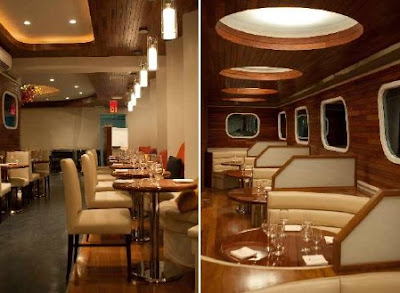 Favorite Restaurant
In 2009, my favorite restaurant experience was, by far, Harbour in New York.

Search the web for photos, and you'll find most of them reflect on the restaurant's interior design, which resembles the inside of a yacht. Stunning as it was, the food was actually superior to the look.

In one night, I probably tasted more than a dozen different kinds of seafood while passing plates between three people, across a seven-course meal (the tasting menu said five courses, but there was an unannounced amuse bouche and petit fours as well). Everything was spectacular! 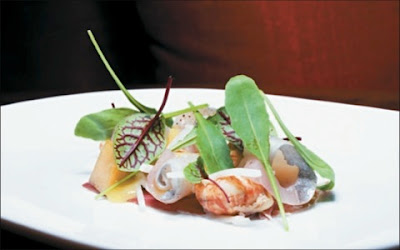 Sadly, since the time I dined there, the head chef changed, talk of a bad location sinking the ship pervaded New York food gossip sites, and if I'm not mistaken, Harbour even closed temporarily while management fixed a few kinks. Regardless, I would return in a heartbeat. Maybe a second visit would not live up to the first, but I am willing to take that chance.

Favorite New Chocolate
In August, I set out on a mission to get to know some of New York's chocolate purveyors. Some initial research pointed me in the direction of Li-Lac Chocolates.

There are two locations: one inside Grand Central Markets (one of my favorite places to shop), and another at 8th Avenue and Jane Street, where I subsequently have learned the famous neurologist Oliver Sacks goes daily to buy one dollar's worth of 72 percent cacao chocolate break-up bar. 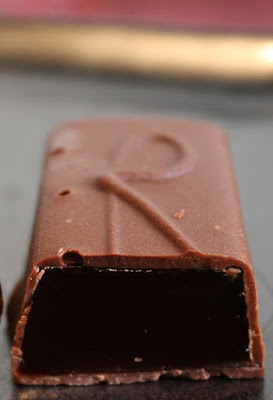 I did take this photo, which reminds me of another noteworthy food-writing moment from 2009: I upgraded my camera.

For me, the reason to go back to Li-Lac again and again and again is the jelly bar. I adore plain chocolate, both milk and dark, and I am highly opinionated about evils of adulterating fine chocolate with too many explosively-flavorful things, like booze-flavored ganache or matcha or bacon. But the jelly bar is a dream come true: playful in texture, complementary in flavors, and positively addictive.

Two Big Accomplishments
I had two major accomplishments this year, which would not have been possible without the support of Boyfriend, who puts up with my "making a mess and then cleaning it up" regimen daily; my dining partners, from my super foodie friends to the ones who blindly come along for the ride and let me nibble off their plates or let their entree get a little cold while I take "just one more photo"; and the home cooks in my friend circle and family, who have tested recipes often knowing that the final product was not going to be all that much fun to eat.

The first accomplishment: The cook book I have been editing has finally found a publisher! More on that when the details of the contract have been sorted out.

The best recipe in the book that I have tasted so far is the soy sauce and brown sugar chicken wings. 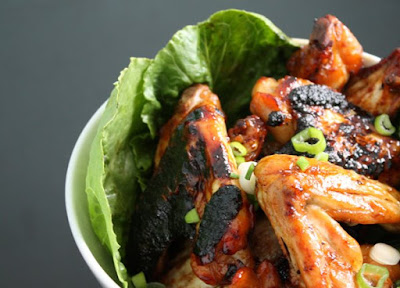 I took this photo, too. I took probably 50 photos of chickens wings, rearranging the burned parts, smearing more sauce on the wings to make them look glossier. And I probably spent two hours selecting good images and cropping them. But I'm very happy with the results.

Second: I (and three other New York-based food bloggers) wrote an article for the BBC's olive magazine. It's in the January 2010 issue in the travel section.