In Search of Dessert in New York 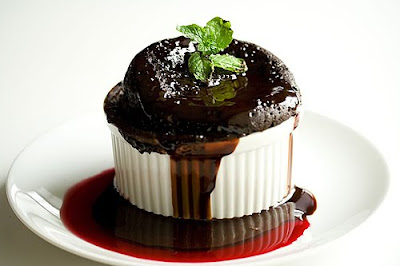 Image from the Gorgeous and Fun blog.

Do you ever want something but don’t know what?

Are you ever thwarted from the object of your desire by not being able to pinpoint exactly what that desire is?

I was talking to my friend last night about movies and movie critics. Critics are never truly objective. So much of their reactions come from their lives as critics. If you've watched seventeen bromances in the last six months, even the best of the bunch isn't going to seem that funny. If you've spent the last six consecutive days inside a windowless theater during an unseasonably warm week in mid-February, you're likely to feel a little jaded while watching Angelina Jolie jump around in a bikini on screen.

It's easy to burn out while chasing the dream film, or the dream food. And it's just as easy to lose clarity about what you're supposedly seeking in the first place.

Lately, I’ve been wanting dessert. But I don’t want just any dessert. I’m craving a dessert that will amaze me, knock my socks off, something that will leave me feeling satisfied of all sugary substances for weeks to come.

But I can’t find it.

The more I look, the more elusive it becomes. And I'm not even looking all that hard. I'm just coasting along and picking up desserts as they appear. Still, that perfect dessert is fleeting.

It all started a few weeks ago, before the winter holidays...

Wait a minute. Shouldn’t this dessert mania have subsided by now? Don’t normal people get sick of sweets after first nibbling, then chomping, then devouring all those holiday happy endings, from pumpkin pie to frosted gingerbread men to hot cocoa with peppermint schnapps?

I don’t know what got into me, but the mission to find an extraordinary dessert is as necessary as ever. I am Galahad! Now, where’s that darn grail?

These are the desserts I've eaten.

Cookies
The quest really started unexpectedly at Joe the Art of Coffee, where I tucked into giant peanut butter cookie ($2.25) that was salty, sweet, and soft all at the same time. Despite all these shining characteristics, the cookie felt so much like any other great peanut butter cookie from my past—and there have been many.

When I learned of the supremely popular Treats Truck, I was momentarily seduced by an oatmeal jammy ($1.25), or thick oatmeal cookie with raspberry jam thumbprint, and a double peanut butter sandwich cookie ($2). But the seduction was fleeting to the extent that I have not gone back for seconds yet.

Ice Creams
At a holiday luncheon with co-workers, I was not about to turn down dessert on the company’s dime at Keen’s Steakhouse (sometimes also known as Keen’s Chophouse). I asked the server (who said everyone says he looks like John Malkovich) for a recommendation. “I only want a dessert if you have something spectacular. What do you have that’s spectacular?” and without missing a beat he said, “Anything with our hot fudge. It’s made in house with Valrhona chocolate.” Within minutes, a coffee cantata ($10), coffee ice cream served in an oversized martini glass, was set before me, layered with the decadent and drippy fudge, bright raspberry sauce, and fresh whipped cream. It was pretty outstanding, but only for about six bites. As good as the raspberries were, they did not belong with coffee and chocolate. And I really dislike how fresh whipped cream coats the mouth and tongue, obliterating my taste buds for hours afterward.

At a New Year’s Eve dinner at DBGB, my sister ordered a coffee ice cream sundae ($9), which was not only very similar to the cantata except with a bourbon gelée instead of the punchy raspberry sauce (I preferred the bourbon), but also within arm’s reach of where I was sitting. It was good, but I after three bites, I tired of the novelty of the gelée texture.

Bars, Puddings, Doughnuts, Beans, Etc.
If cookies and ice cream sundaes weren’t shaking up my sweet tooth, maybe a red bean doughnut (about $1) from Cafe Zaiya (East Village location) would do the trick. That’s right: I’m one of those people who believes in beans for dessert. Bring them on! The sugar coating made the doughnut sparkle in my freezing cold hands as I scarfed it on my way back to the subway. I’m counting this one as a semi-win. The problem is I seldom crave doughnuts, so when the dessert hunger hits again, a doughnut—beans or no—is unlikely to hit the spot. 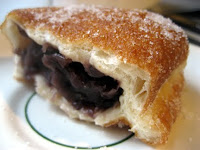 Fast forward to this past week: After seeing a movie (Fantastic Mr. Fox) on the upper west side of Manhattan one night last weekend, Boyfriend and I wandered down through the 70s and down through the 60s until we were just two blocks away from the Magnolia Bakery on Columbus Avenue, just 10 minutes before the shop closed. More than anything else, I wanted a cup of coffee, but I figured a blondie ($2.50) couldn’t hurt, too. We shared the blondie and found it totally lackluster, with very few chocolate chunks and nothing else: no nuts, no caramel, no crackling, slightly toasted sugary bits on top.

To rectify this disappointment, Boyfriend jumped out of his chair and came to the rescue by ordering a small (12oz. of fatty goop is hardly "small") banana pudding ($4.50). We’ve had the famed banana pudding before, and it’s good, but it’s much better if you take it home, slice up one whole banana per person, and plop a few spoonfuls of the pudding onto the fruit. The way it comes from Magnolia, the pudding-to-banana ratio is inverted from what it should be for it to be an edible dessert.

We actually did take home about half the pudding and we did slice up a banana and stir it into the dregs. Which got me thinking, “Maybe I should just make something new and crazy at home to fulfill this craving.”

A couple of months ago, I experimented by making an almond daifuku (also known as daiukumochi or mochi). It turned out all right, but I’ve been dreaming up other kinds of mochi ever since. After the Magnolia incident, I had an idea: vanilla mochi with a slice of banana inside, rolled in sesame seeds! 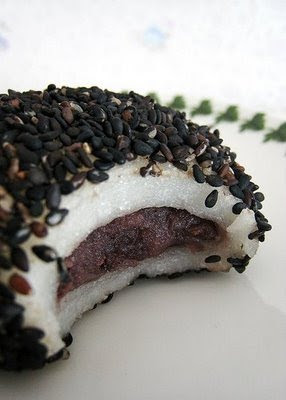 Before testing out this whacky invention, I grabbed a premade (packaged) red bean and black sesame mochi from an Asian grocery store not far from my office in Koreatown, just to refresh my memory. (Remember: There’s nothing wrong with beans for dessert.) The grocery store keeps them frozen when they really should just be refrigerated, and I had a hard time containing myself and not trying to chip away at it with my teeth while it was still a solid mass. Patience has never been my strong suit.

The homemade mochi with banana weren’t half bad, but more experimentation is needed, and thus, no sock-knocking-off results.

Cakes
Only two days ago, Boyfriend and I had what we call a “hungry monster” day, when our appetites are insatiable. The remedy? A bubbling crock of rigatoni and fresh mozzarella, three beers a piece, and an after-dinner jaunt to Lefkos Pirgos. I waited outside with the dog while Boyfriend popped inside for takeout. “I don’t want anything,” I said, “unless you get chocolate cake, in which case I’ll have a few bites.” He settled on a slice of chocolate cake with chocolate buttercream and, unbeknownst to him, flaked coconut (it was hiding beneath the buttercream). It was not the greatest.

Which brings us to the present and my lunchtime run to Stumptown Coffee, located adjacent to the lobby of the ACE Hotel on West 29th Street in New York. It was a toss-up between Stumptown and Cupcake Cafe on 9th Avenue. The coffee at Stumptown, rich and dark, but not nearly as acidic as it seems like it would be, was a joy, if pricey ($2 for a “medium” 6oz. mug). The beet cake with cream cheese frosting ($3.50) was similar to carrot cake but showed no sign of ever having been anywhere near a beet in its short life. A scattering of roughly chopped hazelnuts on the cream cheese frosting made for a nice topping, but all in all, I just wasn’t wowed by the dessert. Maybe I should have upgraded by coffee order to a cappuccino and been done with it.