Spotlight On: (mostly) Monsters With Sandwiches 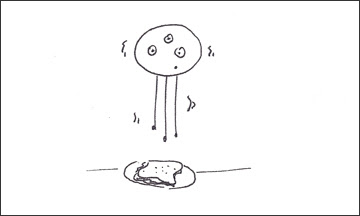 My artist friend Sara has been sharing a series of sketches she started late last year called "(mostly) Monsters With Sandwiches."

They are black ink sketches on white paper of little monsters, who apparently love sandwiches.

As the series got rolling, Sara framed a dozen or so of these works and let me and a few other friends pick one each to keep as a gift. Boyfriend picked one that shows an ecstatic little squiggly monster creeping toward a hoagie that's three times his size, and a fairy-sandwich-monster floating above the scene, magic wand in hand. (I'll have to scan that one and post it.) 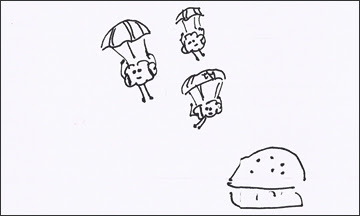 When you invent something like a monster, you quickly learn that they take on a life all their own.

As Sara kept doodling her monsters, they began to develop a taste for not only sandwiches, but also muffins, cakes, whipped cream, cotton candy, and other foods, too. The drawing I picked to keep is of a little monster nearly drowning in a soup bowl. And in the image above, those parachuting monsters are in the thick of "Operation: Get Muffin."

You can follow these and other hungry monster exploits on the (mostly) Monsters With Sandwiches Tumblr page.