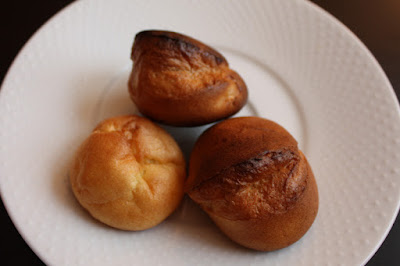 Oh, beautiful French pastries. Who can resist them?

These little cream puffs, straight out of the oven and unfilled, are made from pâte à choux. Pâte à choux is the wet, sticky dough that's used to make éclairs, cream puffs, and profiteroles.

I had no reason whatsoever to try my hand at them, until I started looking into recreational baking courses at some of New York City's best cooking schools.

For $100 to $500, I could hang out in a beautiful kitchen for a couple of hours, talk to baking instructors about technique, watch others as they learn their techniques, and churn out a couple of pies, cakes, some pastry cream, and of course, a couple of pâte à choux pastries. Seeing as I learn best (and enjoy learning most) when I'm in a formal setting, this all seemed like a great deal.

On the other hand, I could spend $15-$50 on ingredients and equipment — all of which I would keep after the cooking was said and done — and make most of that stuff at home, learning through hands-on experience, thumbing through a couple of cook books and blogs for recipes, and reading online resources or watching online instructional videos for additional advice.

For the time being, I opted for the latter option. And I decided to start with the pâte à choux. I searched through a couple of recipes and settled on one from Gordon Ramsay from BBC's Good Food for just the base (not the sauce and filling). You'll notice in the photo that two of the puffs are much darker than the other. The darker ones were the result of following Ramsay's advice to cook the pastry until it is dark gold. They are much firmer than the lighter colored one, but both came out soft and slightly chewy when eaten.

Then I consulted Alice Waters' The Art of Simple Food to make a classic vanilla pastry cream, which is surprisingly close to pudding. In fact, it was so runny that I didn't end up using it for the pastries at all. 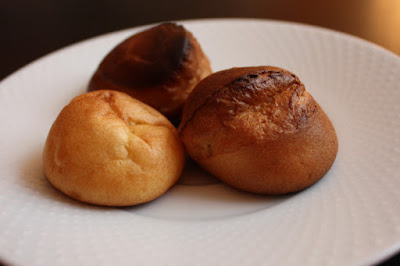 I initially made these thinking I'd serve them as either cream puffs or profiteroles during the Super Bowl, but my friends brought so many other amazing sweets and treats that I ended up just chucking them into a plastic container and popping them into the freezer — where they have been ever since.

In a small, heavy-bottomed sauce pan, bring to a simmer the water and butter. Add the salt. In a separate bowl, stir together the flour and sugar. Bring the liquid to just barely boiling, and ready yourself with a wood spoon. Dump all the flour and sugar in at once and stir or beat vigorously. Continue beating until the mixture is shiny and is pulling away from the pot.

Transfer the mixture to a bowl and continue beating. Add a few spoonfuls of the egg, but not all of it. You may not need to add all the egg, so add it slowly. The dough needs to be quite wet and able to drop off the spoon.

Line a baking sheet with a Silpat or parchment paper. Pipe (or spoon) about a mounded tablespoonful of dough, leaving at least an inch between each puff. If there is a tip on any of the spots of dough, wet your finger and smooth them down so they don't burn.

Pop them into the hot oven, and don't peak for at least 15 minutes.

Remove the puffs from the oven and very gently, but immediately, set them upside down on a cooling rack. If they are dark enough in color, they will hold their shape fairly well despite being upside down.

Allow to cool. When ready to fill, snip off the tops with sharp cooking shears or a sharp knife and fill with small scoops of ice cream or whipped cream. 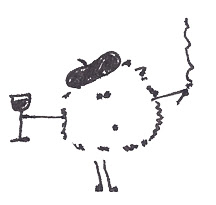