Two Slices of Pizza and a Beer: L'asso, New York 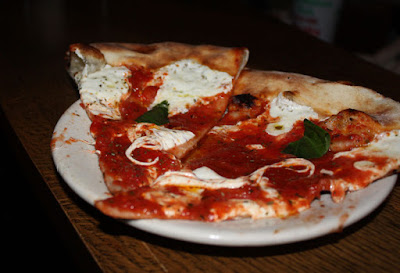 I'm about to go on a severe cheap eats kick.

Every couple of months, I get sick and tired of planning and paying for two- and three-star dinners. Because of the expense, fine dining is more of a luxury hobby than a habit for me, something I do about once every six weeks or so. I don't come from money; I didn't grow up in a fine-dining kind of family. I grew up with pots of spaghetti that could stretch to feed nine people and iceberg lettuce salads (my two greatest comfort foods). And while I live comfortably now, the cost of living in New York city alone is enough to curb one's appetite for $200-dinner-for-two bills.

So every couple of months, I fling my arms into the air in protest: "That's it! No more high-end eating out! No more meals out that cost more than $10-$15 per person. We can still spend our money on good quality ingredients to cook at home, but I declare a moratorium on eating at any restaurant that requires a reservation or costs $18-$30 per entree. We're done!" 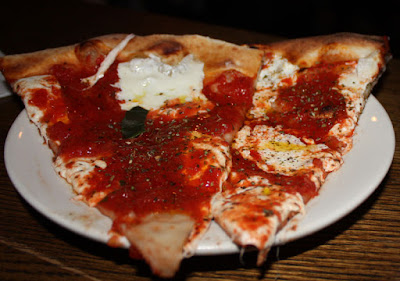 It was in this mindset that two weeks ago, Boyfriend and I went to L'asso in the Nolita (north of Little Italy) and Soho area of New York. We went on a week night at 6:30 in time to make it for happy hour, when the restaurant offers two slices of margherita pizza and a draught beer for $6.

The pizza oven sits right behind the bar, allowing happy hour diners to see when a fresh pie comes out of the oven. The pizza, incredibly thin but doused with a little too much tomato sauce and wet mozzarella, sagged a bit at the small end, but was crisp enough toward the crust. The beer list seems to rotate, but it didn't impress me enough to have me clamoring back for more: choices from Brooklyn Brewery, Six Point Brewery (also Brooklyn-based), some kind of pilsner, an ale, an IPA.

But a light, early, pizza dinner in New York in a cool part of town for $6 really can't be beat. 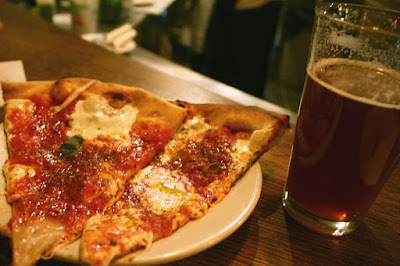