Buddhas and Offering in Thailand 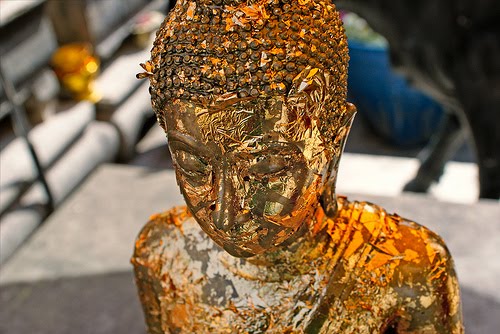 I'm in southeast Asia on vacation and after three days in Thailand, I found myself fascinated with people's relationship with Buddha images. During a long car ride earlier today from Chumpon to Krabi, I jotted some notes:

Little shrines are everywhere: in hotel lobbies, outside large bank buildings and shopping malls in Bangkok, on the deck's of people who live along the canals, and of course within the temple walls. People buy garlands of jasmine on the street that have a loop and tail similar to a rosary, and offer them to Buddha. Women and children can be seen on the roadside stringing the flowers, and in Bangkok we saw people walking along the divider line in traffic selling them to drivers through car windows. 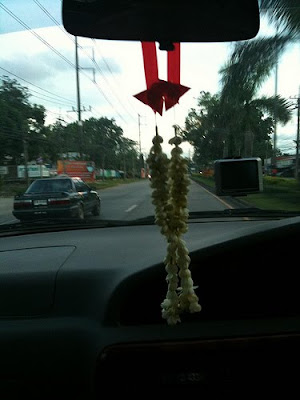 In one temple at the Golden Mount, there was a small Buddha statue covered in gold leaf that fluttered gently in the air conditioning (photos were not allowed inside), and four plastic water bottles, filled to the brim yet uncapped, had been left for the Buddha. They were clearly not left mistakenly because the sat on the statue's platform and were spaced evenly and straight, like toy soldiers.

Unlike in Chinese shops in San Francisco, were devotees of shrines (I don't think the ones I've seen there were Buddhist) leave oranges, in Thailand it was never food left for the Buddha, but usually flowers, coins, incense, and candles.

One taxi driver in Bangkok had a dollhouse-sized shrine on his dashboard. A tiny golden pagoda brought a sense of calmness and peace, always in the driver's sight, amidst the chaos and frustration of Bangkok traffic. And just in front of the little figurine was a faded photo of an old man whom I can only guess was the driver's deceased father.