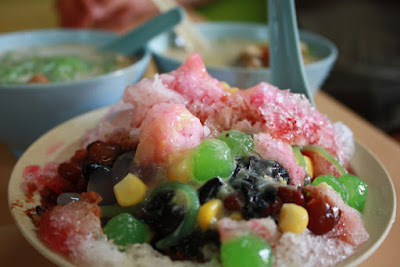 In Penang, Malaysia, my friend told me we had to have shaved ice before we left. He lives in Kuala Lumpur now, but he did his undergraduate degree in Penang, so he knows the town pretty well. He said we'd have to go to one of the covered market areas to find the vendor he liked, which was fine by me seeing as "covered" markets meant shade and it was 90 degrees outside with a blaring midday sun on my pale skin.

He ordered two bowls to start, one for himself and one for the other friends who were traveling with us, and asked me which one I wanted. There were three pictures above the vendor's cart, though I couldn't tell the difference between two of them. So I said, "I want the one that's different from the one you're getting so I can try at least two."

The one I got was what you see in the picture above, and I'll be damned if I pretend I know what all the things are in that bowl, but I can at least describe for you what I tasted.

It starts with a mound of shaved ice. This isn't sno-cone ice. It's soft like snow, and hand-cranked on a machine that looks like a large vice. Next, the pink coloring is a flavored syrup. My friend said it was rose syrup, but I disagree. It tasted distinctly like bubble gum, or to be more specific, the bubble gum flavoring of a dental fluoride treatment circa 1986, which was the one and only year I ever picked bubble gum to take the edge off a dental hygiene procedure. (By gosh, what a mistake...)

Next, see those bright green balls? They are the size and shape of chickpeas with the texture of a very firm gummy candy. However, they are nearly flavorless.

Seeing as the green jellies don't add anything to the mix, a heaping spoonful of red beans, small black beans, and yellow corn skis down the ice imparting their own contrasts. A few strands of green jelly noodles, buried beneath a layer of snow, wriggle and poke out here and there.

By far, hands down, without any hedging, this was the most disgusting thing I ate in southeast Asia. Or, at least I tried to eat it. I nibbled at the ice first, which is when I decided it was best to avoid the ice altogether. Then I picked at the beans and corn, slurped a few noodles, chewed on a green jelly chickpea, and called it a day.

Then I moved to the other option, shown below. 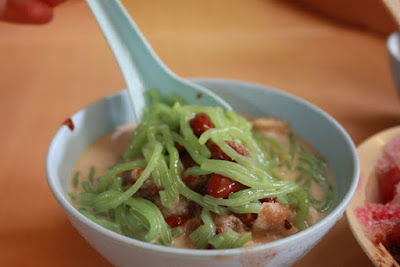 It looks uglier, but it actually tastes refreshing and sweet. This concoction has far less ice (the seller will serve you an extra bowl of plain ice on the side to add it as you eat), but much more liquid. It's more like a cold dessert soup than an "icy," with a milk that has been steeped with barley cereal and sugar or maltose. The same wriggly green noodles were in this dish, but you can taste them much more clearly here. The red beans held their own better in this simpler dish, too. 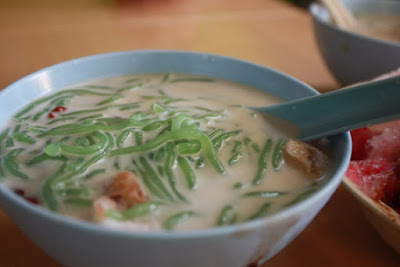