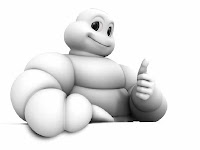 In a few weeks, Michelin will announce its list of restaurants awarded stars for 2011.

I've been combing through the 2010 list for New York. You'd think earning a Michelin star would shield a restaurant from going asunder, but alas, two of the 2010 one-star winners in New York have already closed: eighty one and Etats-Uni.

Chef Ed Brown of eighty one, which was on the upper west side, was quoted in the New York Post as saying: "We started as a destination restaurant in a destination location... When the world fell apart, we changed to cope with it, with a lower-priced menu and more accessible food. But we weren’t able to change people’s perceptions that we were a special-occasion place — which is why we were always full for special occasions, but not on a daily basis."

Over on the upper east side, on the other hand, Etats-Uni closed in November 2009, mere weeks after it was named to the Michelin star list, even before the year 2010 even started — the year of the Michelin Guide officially put Etats-Uni on that list. Heartbreaking!

A snippet from Eater NY, quoting EatWire, from the time reads: "All Etats-Unis and branches closed this past Friday. Kind of sad. Mostly due to management bad decision: change of key items on the menu, increase of the prices of liquor, change of middle management."

Finally, Shalizar, a first-time recipient of the star in 2010, renamed itself as Shalezeh soon after its Michelin list debut. I don't know what that one was all about, but a name change can be risky business for a restaurant, so I'd be curious to hear why it occurred.