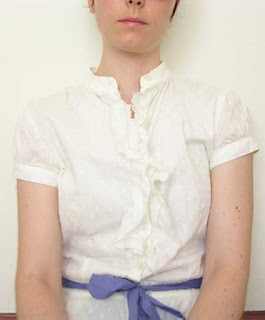 [This is the first post of a three-part blog.
Part II is available here.
Part III can be found here.

My overall size is what I would call “normal,” and when I got skinny, I didn’t weigh much less than I do now or did before.

Six Pounds
It was just a few pounds and a couple of inches, but it meant everything to me and how I thought about myself.

As I explain how I got skinny and how I felt about it, I realize that it will sound like I was a little obsessed, or at the least, fixated in a way that bordered on unhealthy.

What's important to note is that everyone I know sees me as a highly rational, cautious, levelheaded person. My sesibility is perhaps the quality that other people value most in me. Clarity in thought begets confidence, which begets solid decision-making skills, which turns into sensible actions — and that's me.

Anyone who knows me would expect that I look back on the summer of 2008 and say, “Yes, in hindsight, I focused too much on a trivial amount of weight. Yes, six pounds is a ridiculous thing to treat with any reverence. And really, yes, I’m a much happy and better adjusted person now."

But that would be one big fat lie.

The truth is, I liked it. I liked being just a little bit skinnier. I liked it more than I like what I am now. I found a body that I didn’t mind seeing in a mirror. I found a magic number that gave me a little extra confidence.

One Hundred Thirty-Nine
The summer that I got skinny, I weighed 138 or 139 pounds most days, with 137 the lowest number I saw on the scale. The first time I saw 137, I said out loud, “I see the light!” And raised my arms overhead. I was joking with myself when I said it, but those words do capture the sense of how I felt in the presence of that number, like it was a miracle, something that could not have happened, happening. Imagine that: something that cannot happen, happening. I haven't experienced anything like that before or since.

Mathematically speaking, at 5 feet 8 inches tall, 137 pounds is “normal.” At my height, I could be healthy at as little as 122 pounds, which would make my body mass index (BMI) 18.5, just over the cusp of “not to worry” weight.

For my actual body structure and shape, I can admit that 122 pounds would be too light, perhaps even frail, but I did like to keep that number in my head as a frame of references. “I’m 15 pounds away from being one of those girls who is too skinny,” I’d say to myself. “There’s no danger of hitting that low. There’s nothing to worry about.”

The fact that I can recall most of those numbers from memory speaks for itself about how seriously I took my weight loss and management.

The Accomplice
Six years ago, I bought one of those electronic scales that measures not only weight, but also percent body water. Since the day I bought it, I’ve weighed myself every morning, except 1) when on vacation (unless there’s a scale where I’m staying) and 2) on days when I wake up to find myself facing very low self esteem, which happens about three times a year. That's the only time I give myself a pass.

When I moved overseas, I had to pack the scale carefully in my checked luggage. The first time I tried to travel with it, I tucked into in my carry-on bag, protected by a sheet of bubble-wrap, afraid that it might be damaged by the baggage handlers if I checked it. I learned the hard way that airport security takes one look at this oddly shaped electronic device in the scanner and has no choice but to fully inspect all my bags, and me. “Sorry, TSA! I'm just a nut who travels with a heavy-duty bathroom scale. No need to call the Feds!”

My favorite time to weigh myself that summer wad right after coming home from a long day out when there wasn’t time to eat anything. I would run into the bathroom, empty my bladder, and strip off all my clothes. I’d tap my toe against the scale’s “on” button, and as soon as the zero popped up, meaning the scale was balanced and ready, I’d remove my eyeglasses and set them on a ledge. Then and only then would I step up.

After that, there are three beeps. The first beep indicates that the scale has recorded a weight. The second means it has calculated the percent body water. And the third meatheir has calculated a body fat percentage, too. Three beeps means all the numbers are locked in. There's nothing anyone can do at that moment to change fate.

I still do this every morning. At the third beep, I lift my glasses back up to my face and peer down to learn whether it will be a good day or a bad day. In May, June, July and August of 2008, I had only good days.