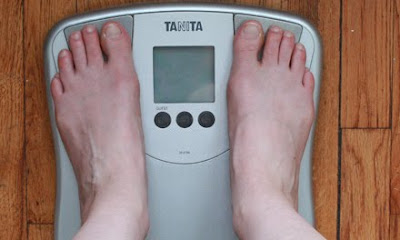 The summer I lost six pounds was the first time in my life I truly lived alone. I grew up in a large family, the kind where someone was always around, always knocking on the bathroom door, always calling dibs on the front seat of the car, always scooping up the last spoonful of ice cream from under my nose. Then, in my college years and quite a few thereafter, I lived with roommates and housemates. When I finally moved on from roommates, I shacked up with my live-in partner. We've been rooming together since November 2003.

In 2008, Boyfriend was in London finishing his master's degree. I was living in London, too, but I was unhappy and wanted to go back to New York. My job, somewhat unexpectedly, turned into a work-from-home situation while I was in England, so it didn't matter if I was in London or New York. My sister was planning her wedding, and I wanted to be there for her during the lead-up to her big day. There were a number of factors. So I packed up and moved. It was hard.

I found a one-bedroom apartment that was affordable for me on my own without being too small for two of us when Boyfriend was ready to join me three months down the line.

I have control issues. I am well aware of them.

For a control freak, living alone is heaven—full-on junkie heaven. It is more than you could ever dream. No one questions what you do, when you do it, where you're going, how much food is in the cupboard, whether the air conditioner should be on, whether you've exercised too much or too little, whether your laundry is in the way, whether taking a shower would disrupt anyone else, and most important of all, what, and when, and how much or little you eat.

Living alone was a control indulgence. Bear in mind that I was also working from home, so I lived in a bubble of isolation. Working from home creates a very different rhythm. No settling in every morning. No vending machines or water coolers. No cake for co-workers' birthdays. No chit-chatty coffee breaks. No senseless meetings because no one asks you to dial in to a meeting unless is necessary. Sometimes I felt lonely, but I had so many things to keep reign my controlling command over that it diverted my attention.

Other elements of my lifestyle changed, too, like the fact that I suddenly enjoyed returning phone calls because my daily interactions with other human beings was fairly limited. I'm not a highly social person, so although I did (and still do) have a core group of friends and family in New York, there certainly were many days when I didn't see or talk to any of them.

Having control over everything meant I could have super detailed control over a few things, so I picked exercising, eating healthful foods in small portions, and monitoring the exact number of my weight in pounds and ounces. My new neighborhood had a free, outdoor, public pool with adult lap swim on weekdays. I started swimming. It also had a track. I started jogging at night and walking in the morning before work. It also had two high streets, as they would call them in London, or main roads with businesses that I was interested in getting to know well. I took up walking on my lunch breaks to explore them.

Actually, I had tried to take up jogging in the past, but I am a terrible runner and I never enjoyed it. This time, I came up with a new strategy. As I ran, I would coach myself by saying, "All these out of shape people join the Army and within 2 days of basic training, they are able to run 3 miles. If they can run 3 miles, so can I! I am young and fit, and if they can do it, damn it, I can do it better!"

My neighborhood also had two or three fiercely competitive produce markets. When I moved from overseas, I didn't bring with me any pantry items, such as flour, sugar, spices, vinegars, and canned goods, as one would when moving locally. Aside from the fact that all those things are heavy to carry and I did all my grocery shopping on foot, I thought to myself, "The pantry is already empty of all processed foods, so I might as well try to keep it that way as long as I can." My diet that summer consisted about 85 percent of fresh food: vegetables and fruit, dairy (mostly yogurt and milk, and feta cheese), and eggs. I ate pita bread, a brand that was made locally, half a piece at a time, so that a bag of 10 would last me nearly two weeks, and I ate cold fish, like tuna, herring, and smoked salmon. The temperature that year was blisteringly hot, so I avoided cooking as much as possible. From time to time I grilled some zucchini or boiled an egg, but mostly, the stove was off.

Halfway through the summer, I lugged home a sack of flour and baked a few batches of homemade bread. Seeing as it was 90 degrees and humid in my kitchen most days—ideal conditions for getting bread to rise—I figured I might as well make use of it. It didn't last long. I gave up bread baking the day my glasses literally slipped off my face from sweat.

I still ate a little bit of chocolate, and dried fruit like raisins, figs, and dates, muesli if I was feeling fatigued, but there really wasn't much packaged food in the house. It's hard to see how much food we have around us at any given time, but take a peek in your cupboard or refrigerator. Now imagine it without all the items that are in a can, bottle, jar, or box.

Hungry
Another thing I started obsessing over was feeling hungry. I don't want to use the word "hunger" because it's not like I was starving. What I'm talking about is the "hungry" feeling one gets after exercising for a long time, but not being able to eat for another hour or two afterward.

When weight loss people—and by that I mean advertisers, product vendors, self-promotional weight loss authors/doctors/fitness experts, and people who give testimonials about losing weight—proclaim that you can lose weight without ever feeling hungry, I think to myself, "Well, okay, you're not really going to lose all that much weight then." You can lose weight without feeling hungry if you just want to lose some weight; but if you want your body to be small and to have a minimal amount of fat on it, feeling hungry is crucial.

(Okay, there might be people out there who have always been skinny and tend to not feel hungry often, but the majority of us just aren't like that.)

Weight loss people make it sound like having a hunger pang or two, or having an empty belly ever, is not an option. It's off the table.

The reason advertisers say you can lose weight without ever feeling hungry is because they're trying to sell you food! They want you to eat more (of their product), not less. Companies that sell diet food must convince people to eat it—a lot of it.

The summer that I got skinny is the only time in my life I ever embraced the feeling of being hungry. It's tough to do, but being in an isolation bubble made it easy. I tried to make sure I could feel an empty or near-empty stomach before every meal. At night, as bedtime was nearing, I would sometimes feel a bit hungry and I would sometimes eat a quarter cup of muesli with skim milk, a light a nutritious snack. But as I began to embrace the empty stomach as a sign of weight loss, I turned my thoughts around. Being hungry before a meal also became something I looked forward to because I truly enjoyed eating so much more that way. So before bedtime, if I had been feeling hungry, I'd think: "Hungry is a sign that I'll be losing more weight. And, it will be easy to get through the next 6 or 7 hours of feeling hungry if I do it while asleep. Plus, if I go to bed a little bit peckish, I'll wake up more excited than ever to eat breakfast." Win-win-win.

Another discovery: exercising on an empty stomach doesn't make you feel immediately famished. Rather, it kills your appetite for a bit. This bit of wisdom was something I learned through experience a few years earlier when I first started working out at a gym. By the time I arrived at the gym, I'd want a snack; but I wouldn't have anything on hand. So I'd pump my arms and legs for 40 minutes on the elliptical machine, jog a mile, curl my biceps a few times, and drink a lot of water. By the time I finished my workout, I wouldn't even be able to think about food. There was a 20- or 30-minute window when I just didn't feel like eating. But combined with the whole exercise session, this 20-minute window could easily grow into a two-hour period all told. Two hours of not thinking about food? That was a real new tactic.

Basically, I started doing any activity or practicing any state of mind that helped me feel good about the lack of food in my belly. Shopping (though mostly it was window-shopping) worked great, too. I could be away from home, and thus away from the refrigerator, for several hours, on my feet, walking around, navigating aisles, climbing escalators, carrying heavy bags home (when it was grocery shopping), and not having an excuse to eat for hours. I'd have a dinner meal planned on my head for when I got home, which meant I had no excuse to eat take-away food in the department store cafes, or the bakeries that were en route between the subway stop and my house, or any other junky fast food.

Losing weight has become more important to Americans than being thin. No one cares so much anymore about “thin.” Now we care about “weight loss.” Dieting products, not to mention entire industries, have thrived for decades on weight loss, but now more than ever, we are truly captivated by it. We treat weight loss as an accomplishment. Several television shows are dedicated to watching bodies drop weight. Winners of reality TV shows are rewarded for weight loss, not for their final size. We no longer care so much about the final result, as long as the total loss is a sizable number. “But she lost 150 pounds! Who cares if she’s still a size 10!” It’s, “look at the deduction,” rather than, “what size should this person be?”

So big deal. I lost six pounds. That's not a big enough number to be significant to anyone but me.

However, the whole journey meant something, and having a smaller body meant something. It was not a black-or-white, good-or-bad experience. That snapshot of my life reminds me what I'm capable of, while also reminding me what I'm not doing now. Any time I am being hard on myself, I turn around this notion of what I'm not doing now to mean I'm failing. Can I control these thoughts and feelings, the same way I was able to control my weight? I don't even know any more. My fear is to admit that they might be controlling me.


I owe Boyfriend a very special thank you for putting up with me, and for his gentle efforts every day to help me see myself through his eyes.