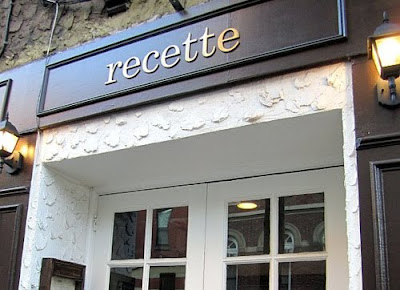 Recette, a small restaurant in the West Village area of Manhattan, has gotten a lot of press, but I've somehow managed to avoid reading most of it.

So when I had dinner there the other night, it felt a little like going to the movies when I know next to nothing about the film. I like that sensation. I like having a clean slate of expectations. (Note: I'm calling this a "preview" rather than a review because I don't feel like I can fully review it after only one dining experience.)

I had heard only positive things about Recette, but never in so much detail as to understand why or in what capacity. The restaurant is small. It offers a tasting menu ($75) as well as an a la carte menu of smaller dishes that aren't exactly tapas-sized, but aren't dinner-sized either. Diners ordering a la carte might want to choose at least three courses per person, although I wouldn't say the waitstaff pushes this. And rightfully so. I hate when servers tell me how much I should eat.

Between us, Boyfriend and I had six dishes:

1. a "snack" of delicate hamachi crudo with a zippy harissa aioli dolloped on the edge, and a single piece of uni balanced on top, the butter of the sea

2. autumn squash espuma, or a smooth soup that had been whipped and aerated almost into a foam, and in the middle, blanketed by soup, lay a single piece of roasted foie gras; a scattering of brussel sprout pieces added chew, and a bacon broth added tableside enveloped the whole thing with salt and depth,

5. ice cream and caramel over caramelized apples and a bit of almond cake,

6. pecan something or other with raisin ice cream and a few jelly batons (I can't remember exactly what was going on in this dessert, but it was frankly too much).

Locked into my taste memory forever: the soup. Boyfriend said it brought a tear to his eye.

The desserts, while good, didn't stand out to me. I like straightforward desserts with elegance. These were a bit too deconstructed and plated with too much zeal. Give me a cleanly cut slice of cake and a quenelle of ice cream. Don't balance a wafer at a 45 degree angle, draw Nike swooshes with sauce, and build a gridlock of extra stuff. I'm a firm believer that great desserts don't have to look like show stoppers. One or two embellishments can heighten a dessert, but three or four or five embellishments turn it into a flashy piece of artwork.

With drinks, plan to spend at least $75 per person for the a la carte menu. And now that I have a more clear understanding of what Recette offers and what it does well, I would love to go back for the full tasting menu.