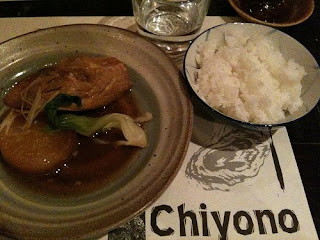 Very few restaurants beckon me to return again and again. When they do, it's a sign they've struck a balance between quality, originality, variation, atmosphere, service, and price.

Chiyono, a small East Village spot, may not appear to have much "originality," serving straightforward Japanese home-cooking, but that type of food is fairly rare in New York, and so the restaurant's uniqueness, ironically, is in its traditional style. And if, like me, you are mostly unfamiliar with traditional Japanese cooking, the arrival of each dish will come as a surprise, as the English language menu descriptions are entirely nondescript.

For example, I asked the server for more detail on the starter "yam with hot soy sauce" (pirikara-konnayaku; $4.50). Is it "hot" as in spicy or temperature? Answer: Spicy with dried chili. Is it a cold dish? Answer: No, but only warm. "The yam is... chewy," she added. The cubes of firm but gelatinous yam that arrived had been steeped in and discolored by soy sauce seasoned with rings of dried chili pepper. Tighter in texture than pâtes de fruits, each bite required a good amount of chewing, tasting, and savoring. Similarly, one of the specials on that same visit, yellowtail with radish ($6.50) sounds positively boring, until bowl of light and barely salty broth arrives containing a sizeable disc of braised "radish," which cuts like a cooked potato, a palm-sized portion of fish so moist and tender it gently tumbles into your chopsticks, and a single head of bok choy, all garnished with dollhouse matchsticks of ginger. For the price, I was expecting to get three conservatives mouthfuls of food, but teamed with a bowl of white rice ($1.50), the yellowtail was a modest meal in itself.

Attention to detail and quality are most apparent in the fish dishes, which is where Chiyono shines brightest. Fish and seafood are only elevated to a level of excellence when they are cooked with care, a delicate hand, and loving precision.

Saikyo-yaki (grilled cod marinated in miso; $12.25) is a star on the menu. Kaki-furai (fried oysters; $12.25)—the biggest oysters I have ever seen, available in the winter only—look like three shoes on an austere plate, with a scoop of fresh onion salad that bites through the creaminess of the bivalves. Kaku-ni (slow simmered pork belly with soy sauce; $12.50) is the only non-fish entree I have tried, and though I personally can't claim to have fallen in love with the salty, soft envy of bacon, those who think highly of pork belly just might.

Lackluster dishes are few and far between, but don't bother with either the pork or shrimp gyoza ($5.25 and $5.75, respectively). Explore the more interesting appetizers, despite their seemingly simple descriptions.

One petite woman accounts for all the service, and she is darling, if reserved. On a recent visit, my sister and I heeded her recommendation to try the homemade organic sweet potato ice cream ($6) to great appreciation.

The beauty of Japanese food for me is its understanding of balance, from flavors and textures to temperature. It takes great care for one's customers to hit that balance again and again. For its location, quality, service, and attention to detail, Chiyono is sorely underpriced—and I'm not complaining. It's part of the reason I will eat there again and again.

Closed Mondays. Open for dinner Tuesday-Sunday, and brunch on Sunday only.