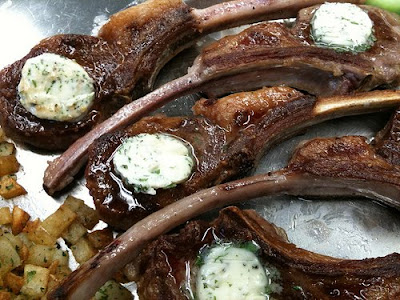 In the first session of the Fine Cooking 1 class at Institute of Culinary Education (ICE) in New York, the 16 students and one instructor sat at a long table. The instructor for this course was Chef Peter Berley, who explained that he would be teaching our class at least two more times but that we would have a different instructor for the other two classes. I'm not sure how common it is for the instructor to change, but I didn't mind it. However, if I had signed up for a specific instructor and I found out it wouldn't be the same person throughout, I would be pissed.

Lecture
Chef Berley talked with us for about an hour about the course, which teaches techniques of cooking rooted in the French tradition, rather than a specific series of recipes. Although we did have a specific menu that we were going to prepare, there were several variations of things to choose from.

Before I get into the menu, I want to mention that this first hour was probably when I learned the most. Although a lot of the things chef Berley covered were things I already knew (for example, why you should never crowd or cover a pan while sautéing), the few things I didn't know or had never heard explained in his particular way before were extremely valuable. One woman in the class who seemed to be at my level of proficiency with cooking later said to me, "That roast chicken recipe [from Thomas Keller's method] that he gave us at the beginning of class alone was worth my time in coming here."

One of the gems of knowledge for me was about the importance of salting meat before browning, and at what point in time to salt it. The salt helps develop the crust, and thus helps the meat release from the pan when it's ready to be flipped. You need enough salt, and for many meats, you need to apply the seasoning right before you put the food in the pan; and for many meats in which this is not the case, you often want to salt it several hours before cooking so the salt can work its way into the tissue and break down the fibers a bit.

Part of what I liked about Chef Berley is his reasonable and realistic approach to food. "You're going to learn a lot in this class that is classic French technique, but that I would never do at home," he said. He talked about how French cuts are wasteful, unless you're making stock all the time (which cooking schools generally are). He talked about how we might learn the technique for repairing a broken vinaigrette, but that in many cases, he'd rather see a broken dressing that a creamy and opaque one that hides the beauty of the vegetables. He said plastic cutting boards are regulation, and so they are what the school uses, but that wood is the real way to go for its antibacterial properties, long life, and the fact that it doesn't destroy knives the way plastic does. These are all things I totally believe, too. My head was getting sore from nodding in agreement.

After about an hour, we formed four groups of four. Each group had a large work table, a small sink, and an oven and range top.

Hands On
The hands-on part of the course started not with a tour and overview of the kitchen—which I thought would have been helpful—but some demonstrations. Chef Berley reviewed knife honing, dicing, paring, peeling onions, peeling garlic, and a lot of other basics. A few of us seemed eager to move on, but for at least half of the class, this was all brand new material. I don't know why these beginners didn't sign up for a 101 class, which ICE offers. It seemed strange to me that they enrolled in "Fine cooking," which implies a degree of sophistication. I have been wondering if the weekday sessions of this course are more advanced. 10a.m. to 3p.m. is a time slot that many professional cooks would be available. Do the novices cluster into the weekend sessions?

After the demonstrations, we basically just worked through out menu in a rough order that the chef had outlined earlier.

The Menu
Soup: Choice of a hot vegetable soup or gazpacho

Salad: Microgreens and vinaigrette, with at least four recipes to choose from for the dressing

Protein: Lamb chops with beurre composé (or "compound butter," or in my lingo, simply "herb butter")

Dessert: Macerated fruit, with a choice from about three or four recipes 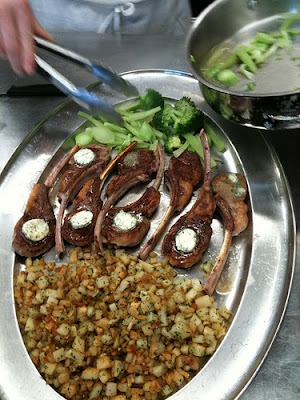 One of the problems in cooking as a team is that it's difficult for every person to learn and try the whole recipe or technique. In my group, two of my team members were novices. Another woman, Helen, and I were at the same relative speed. But it takes a while before each member of the team figures out how they are going to interact with the group, and I had a hard time with this. It's one of the reasons I have always hated group exercises. Who is going to be the leader? Who will divide the tasks? Who needs to make sure the quietest person isn't so shy that she does nothing and learns nothing?

When there was a task that I clearly did not need to practice but suddenly found myself doing, I tried to offer it to the other less experienced cooks. I handed over my pan of potatoes: "Here. Do you want to practice sautéing these?" But when it came time to brown up the lamb chops, I wasn't shy to step up and say, "This is something I need to practice. I'm really bad with meats. Do you mind if I handle one of the two pans?"

The other thing that took all day to decipher is the fact that Chef Berley is not a stickler for accuracy. I imagine that some of the other instructors are. At one point, we needed to blanche six cups of diced potatoes. Helen and I were prepping. I put my dice into a measuring cup. Helen put hers directly into the cooking pot, which was filled with cold water, a good idea because the potatoes won't discolor—but bad if we are really supposed to measure out six cups.

"How much have you put in there already?" I asked her. She didn't know. So I grabbed a small strainer and started scooping out the cut potatoes and putting them into a large measuring cup. Chef Berley approached me. "What are you doing?" he said. "Well, we didn't measure the potatoes before putting them into the cold water," I said, "so I'm fishing them out now." He kind of rolled his eyes and said, "Okay I guess." So, I ditched it. I eyeballed it. And when the pot was half full, I said, "That seems like enough."

Maybe my expectations were off, but I thought that for "fine cooking," we would be asked for accuracy. I thought precision would be a goal. I thought we would be refining some techniques. But this first course was very rudimentary.

The Meal
Around 2:40p.m., we all plated ourselves some lunch and gathered back around the table. Some of the students asked Chef Berley how long this would take him to make at home. Before he could answer, I thought to myself "half an hour," and then Helen leaned over and mumbled, "30 minutes, tops" and Chef Berley said, "about 30 minutes or so." Most of the rest of the class was starry eyed. "Wow! And it took us how long? Three hours?"

Winding down the meal, leftovers littered the kitchen. The assistant said to take what we wanted. The rest would be thrown out. A couple of people with long drives or train rides ahead of them weren't interested in taking home leftovers. A few others had to dash out and didn't have time to pack up anything. Three or four of us went to town. The others were most interested in taking home the berries, so I cleaned house on everything else: soup, salad, dressing, half-empty bottles of wine. I've worked in food service before. I know that staff don't like to see waste, and neither do I. I have a feeling I will be the last person to leave the kitchen in the upcoming four classes.