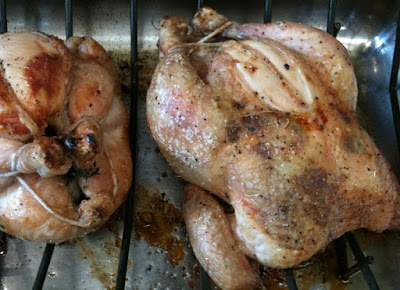 The second class in the Fine Cooking recreational course at Institute of Culinary Education (ICE) in New York focused on roasting. The course comprises five five-hour sessions and each lesson looks at a specific technique of cooking. Class 1 was on sautéing.

I can see how some recreational cooking students would really like Chef Sanchez. He's boisterous, scattered, and non-linear. He likes to play music while cooking. His speech is so rapid fire that he frequently misspeaks.

Something happened to me a few years ago (I can't say I can describe it exactly), but I basically hate to listen to music. Except for a handful of circumstances, like dancing, I find music jarring. It's very difficult for me to do anything that requires even the slightest amount of focus, like driving, cooking, or cleaning, when there's music. It's funny because I have the radio on all the time when I'm in the kitchen at home, but it's always talk radio. Music is more than just distracting. It actually puts me on edge.

Chef Sanchez brought an iPod dock into the classroom and set it up right next to my group's cooking station. His music was not only on for most of the class, but it was also blasting about four feet from where I was standing. From the get-go, Chef Sanchez's style did not jive with me. I think a lot of the other students really enjoyed it, though. More than half the class are novices, and I think they appreciated having someone tell them to not take cooking too seriously and to have fun with it. But for me, a loose and fluid classroom experience is not conducive to learning. 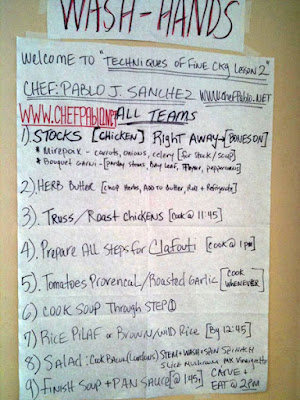 The Technique: Roasting
This class was all about roasting. We were supposed to roast five things: chicken, stuffed tomatoes, lardons (or cubes of bacon), pignoli, and a clafouti. The pine nuts would be "toasted," and the clafouti would be "baked," and although we use different words to describe those things, the concept is still the same as roasting —using the dry, indirect heat of the oven to cook food.

The first problem is that each group did not get to roast their own chicken. We prepped and trussed two chickens per group, but then we turned them over to the instructor and his assistant, who moved them to a set of ovens behind our working kitchens. In other words, we didn't have any hands-on control over the actual cooking. This was very frustrating.

Second, Chef Sanchez did the same thing with our stuffed tomatoes. Rather than let each group roast their own, he arranged them all onto one big tray and moved them to one oven. He did the same thing with the clafoutis. At least these were right in the classroom kitchen ovens, unlike the birds that were removed from sight. Still, only a few people would be able to monitor the tomatoes and the desserts and rotate the trays, keep an eye on the doneness, and pull them from the oven when they were finished. How are we supposed to learn how to roast if we don't get to do any of the roasting?

Third, Chef Sanchez decided that we should sauté the lardons rather than roast them because "it's more active, you know, to have something on the stove top that you can move around and watch and smell." Okay, but the purpose of the course is to work on one specific technique per session! We also ended up toasting the pine nuts on the stove top due to the complete disorganization about the ovens. Actually, two of the ovens in the classroom were not even lit at all.

What We Learned
Despite the chaos, we did learn how to make stock and how to cook rice. Rice is one of those foods that is so ridiculously simple and uncomplicated, and yet it's one of the trickiest things to master.

Years ago when I was living in London as a student, I got into a conversation over dinner with a couple of girls, one from Taiwan, two from France, one Ukrainian-American, and me about how to cook rice. I did not grow up eating a lot of rice. Everything I knew about cooking rice at that point had come from reading the backs of packages. Sometimes it was two parts water to one part rice, and sometimes it was one-and-a-half to one. My opinions were not strong. But the other girls were all ready to duke it out. The Ukrainian-American girl said, "The whole trick is getting the proportions right." The French girls said, "You're wrong! The trick is to boil it and strain it, just like cooking pasta!" And the Taiwanese girls interjected, "No no no. You are all fools! The trick to making rice is to use a rice cooker!"

Of course, they are all right. How you cook rice largely depends on what kind of rice you have and how you plan to eat it.

In the class, we did a steamed brown rice in stock in a two-to-one ratio (two parts liquid, that is), and a wild rice that was boiled and strained. We also did an arborio rice cooked directly into a soup.

We also learned how to truss a chicken two ways. The method is to use twine. The second way, which is pretty ingenious, is to make an incision in the chicken skin on one of the legs so that you can cross the other leg into it; then tuck the second leg around and into the first, almost like a yoga lotus position.

Chef Sanchez also taught how to carve a bird. His method involves removing the wish bone before cooking. I've never heard of this before. His rationalization is that after the chicken is cooked and you're ready to carve it, that pesky bone is already gone. What I don't understand still (and please leave a comment if you know!) is why wouldn't you just remove the wish bone after cooking as your first cut? It seems like you would want to keep the chicken intact as much as possible before cooking, whereas after cooking, you're going to cut it all up anyway. 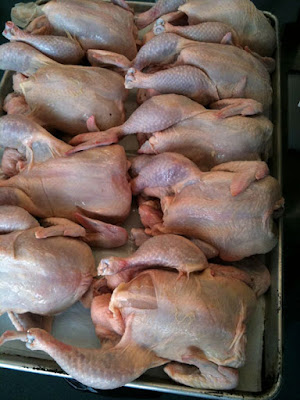 Dessert: Mixed fruit clafouti (which I've made before, many times over) 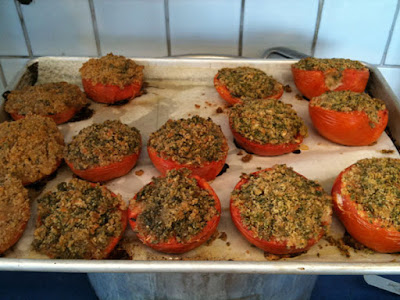 The Meal
Roast chicken has never won over my heart, and it didn't this time either. When the class sat down to eat, only two or three of the birds had finished cooking through. The rest needed an additional 15 to 20 minutes in the oven. In my experience, this always happens. Chicken never cooks as quickly as you think it will. I don't know if it's because people open their ovens too often and let out the heat, or if the "recipe" for figuring out how long a bird will take to cook by weight is just off, or whether most ovens are not calibrated properly and the temperature is off. In any event, I got a secrete smug bit of satisfaction that these birds were still bloody the first time Chef Sanchez cut into them.

The rice pilaf we made should have been lovely but wasn't. It consisted of wild rice, brown rice, currants, toasted pine nuts, and butter. I snuck in a little more color and flavor by using our herb butter instead of plain butter, but the dish was still not quite there. Had I made it had home, I would have used raisins or cranberries instead of the tiny currents, and I would have soaked the fruit in water to plump it up. I also would have added about a cup of chopped parsley, and maybe some additional fruit or vegetables, like diced apricots or fennel, to freshen it up.

Serve me a meal at 2 or 3 in the afternoon, and the soup will always be the thing I love the most. This soup had escarole, a gently bitter green that I adore, arborio rice (which broke and got a little mushy, unfortunately), carrots, celery, onion, chicken stock, and butter. We finished it with grated Parmesan cheese and black pepper. This is a wonderful winter soup, which you could easily change up with root vegetables, like parsnips or celeriac.

The Other Way to Roast a Chicken: Thomas Keller's Recipe
In class 1, Chef Berley made an aside about how we would be roasting a chicken in class 2 in such a fashion that he himself would never ever do at home. He prefers a recipe that he learned from Thomas Keller:
(You can also view the recipe on an easy-to-print page here.)


1. Rinse and dry the chicken. Dry it thoroughly. Rub the salt all over the skin of the bird and inside its cavity. Place on a roasting pan in the refrigerator uncovered. Leave overnight to dry out.

2. Remove chicken from refrigerator at least 30 minutes prior to cooking. Preheat oven to 475°F. Let the oven preheat at least 20 minutes!

3. Put the chicken in the oven, close the door, and don't open it for 50 minutes.

4. After 50 minutes, check the bird. You can now baste it with the drippings or stock or butter or olive oil, or sprinkle it with herbs if you like. Depending on the size of the bird, cook for another 5 to 20 minutes.

5. Remove from oven and let rest at least 10 minutes before carving and serving.