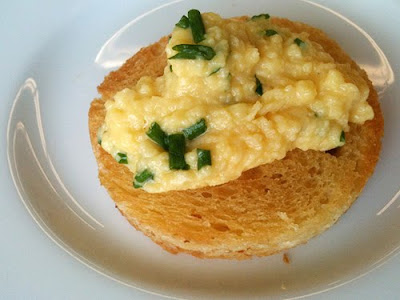 In this series, I've been posting about the recreational cooking course Fine Cooking 1 at the Institute for Culinary Education. Last week, I completed the fourth of five sessions that make up the class. Each session focuses on one technique. Class 1 was sauteing. Class 2 was roasting. Class 3 was braising. Class 4 was all about eggs.

Two foods that are utter simple and yet extremely difficult to cook right are rice and eggs. Rice takes ages to learn to do right, but you can master eggs if you're willing to forget everything your American mother taught you and cook eggs like the French.

My mother cooked eggs the way most Baby Boomer generation mothers did. She heated a pot of water, dropped in a couple of eggs with a thunk, and boiled the shit out of them.

Mom, I love you, but your hard-cooked eggs suck.

When protein reaches 170°F, it begins to toughen. When you drop cold eggs into rapidly boiling water and leave them for for 12 minutes, you'll get rubbery whites. You'll also get cracked shells and seeping goo because the small amount of air that's trapped inside the shell doesn't have time to ease out through the tiny pores in the shell, like it does when the temperature rises slowly. The air expands at a slower rate and it can escape. That's why you sometimes see little streams of bubbles emitting from gently simmering eggs. When the air expands too quickly, on the other hand, the shells pop from the force.

Boiling eggs also creates that stinky bluish-gray ring around the egg yolk. When you hard-cook eggs gently, you're much less likely to see, taste, or smell this sulfur.

We learned one of the way to hard-cook eggs in the shell in class this week, but I have another method that works just as well. Here they are:

1. ICE method of cooking eggs: Place cold eggs in a pot with enough cold water to cover them by three inches, plus a splash of vinegar. Turn on the flame, leave the pot uncovered, and the moment it reaches a boil, close the fire. Cover the pot and let the eggs steep for eight to 12 minutes. When they're done gently shake the pot until the shells crack a little, then transfer the eggs to a bowl of cold water. When cool, shell them.

2. Jill E Duffy's method of cooking eggs: Place cold eggs in a pot with enough cold water to cover them. Turn the heat on medium, and cover the pot, but only if you have a clear lid. When the water begins to boil, lower the heat so that the water is just above a simmer, and cook the eggs exactly three minutes—two-and-a-half if you're nervous. Immediately transfer the eggs to an ice bath. When cool, tap them on the counter all over to break the shells, then set them back in the ice water before trying to peel them. 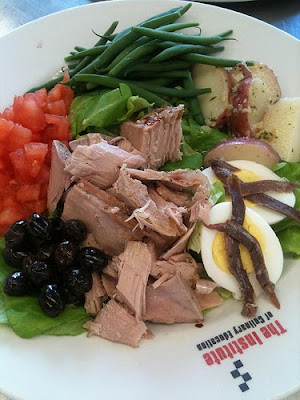 You've got to try this method for yourself a few times, always using the same pot, same number of eggs, same burner, before you get it down. Everyone's results are going to vary, so you've got to try it before you know whether the eggs need more or less cooking time.

Menu
In this week's class, the menu contained so many eggs that by the end of the day, my tally for eggs consumed was up to seven. 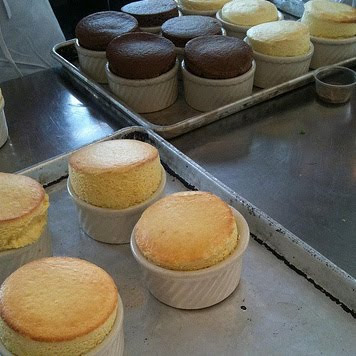 While I did learn a few tricks in this class, it was once again largely things I have done before. I once went on a three-month soufflé kick. I made about a dozen tiny chocolate soufflés, two giant orange-sweet potato soufflés, a savory Gruyere asparagus one, and who can even remember what else. The point is: I'm well versed in the art of soufflés. 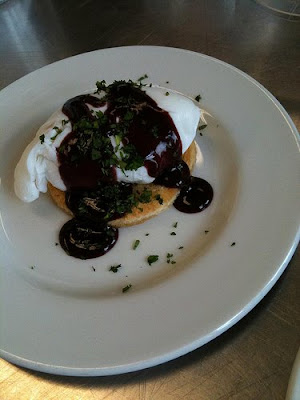 I've also done more than my fair share of egg-poaching, although I almost never have to do it at home because Boyfriend has also mastered the technique and likes to show off his skills. We poach eggs on average maybe twice a week.

The French scramble was new to me, and by god, it is something else. It's basically egg suspended in butter, cooked slowly over a baine-marie, and adorned with chives. It's exceedingly rich, and thus great as hor' derves. 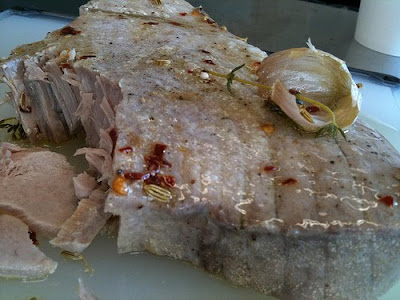 We also made tuna confit (shown above, but not potted), which was a new technique for me, but not at all difficult. I wouldn't ever do this at home because of the expense, but you take a huge slab of tuna, cure it in salt in a colander over a bowl in the fridge (overnight if possible), then set it in a tight-fitting pan and cover it with olive oil. Add seasoning, like pepper flakes, lemon zest, thyme, and turn the heat on to the barest simmer you can hold. Let it poach until it's cooked through. Remove to a platter to cool. At this stage, we just ate it, but to "confit" it, pack the fish into clean jars and fill them with the cooking oil to cover. Spin the lids on tight, and this will last in the fridge for a month or two. You can make it shelf-stable by processing the cans, which will then keep for several months at room temperature.