Churros in Chocolate in Valencia, Spain 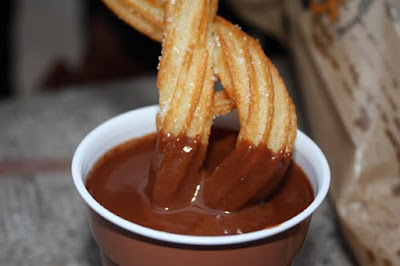 After driving nearly four hours through horrendous rain showers, we (my two sisters, Boyfriend, and I) arrived in Valencia. The skies cleared. Our hotel had parking. And a month-long festival to celebrate the entire region was on its last days.

We hit the streets and ambled toward the city center. 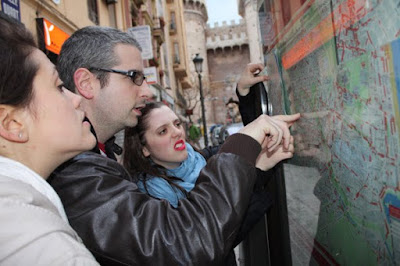 Just outside one of the four or five story-tall gates of the old city wall, we spotted one of the carnival-esque, mobile frying stations that sells street fair food. This one sold sweet fried things, mainly churros.

We asked for a large bag with chocolate sauce to share and watched as two men grabbed and spun together the ends of the dough as it protruded from an industrial machine and into a vat of scalding oil. A few moments later, one of the men lifted each churro from its frying bath and tucked into a bag. He held a shaker full of sugar over the bag and shook and shook and shook. Another person ladled molten chocolate into a plastic cup (not a great combination, plastic and heat), collected our five or six euros, and set us on our way. 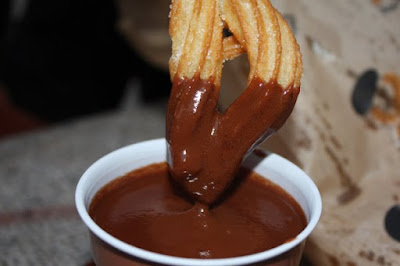 Crispy on their ridges yet slightly spongy at the center, the churros tasted best with sugar but no chocolate. That viscous cup of chocolate is deceiving, as it's low-quality stuff and cut with a lot of fat, and by the taste of it, some kind of fat that's solid at room temperature, like vegetable shortening. 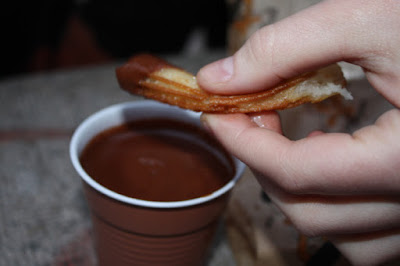