How a Great Interview with a Chef Can Still Feel Wrong

In writing an article for a specific publication, you sometimes have to put together a piece that you don't whole-heartedly believe in. (Full disclosure: I love my job. What I write about in this post is in part self-reflection on how I can do my job better.)

I've been speaking to professional chefs recently for an article I'm putting together for work about high-tech kitchen gadgets. The final article needs to be light and oriented toward gadgets. It has to be playful and engaging for an audience who's more interested in technology than food and cooking.

The connections I've made through researching the article have been astounding. I got to talk on the phone with Chef Francisco Migoya about two weeks ago, who had found out the day before we spoke that he was nominated for a James Beard Award. I've been reading Chef Migoya's blog, The Quenelle about experimenting with pastry arts for more than a year. He does incredible work.

Another person I've had the chance to meet is Nathan Myhrvold, an intensely diversified individual with expertise in both technology and cooking. I had a chance to meet him before he spoke about his new book, Modernist Cuisine: The Art and Science of Cooking at The New York Academy of Sciences. 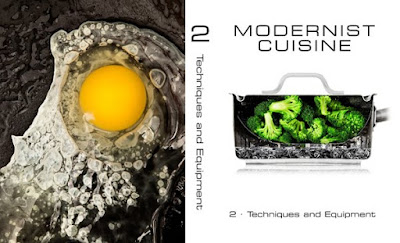 All the people I've met have been amazingly receptive to my questions, and they've all shown a deep understanding of science, too. During a few interviews, I tried to jump straight into some questions about gadgets and tools that will appeal to a tech-hungry audience, and the chefs have said, "Wait. Before we talk about using blow torches and combi ovens, let's first understand what's going on when we cook food. We're talking about altering proteins..." These frank and straightforward explanations of the basics of cooking give me the utmost respect for these chefs. It helps me appreciate just how much they understand their trade. But it also makes me cringe a little inside.

The problem is, the final article is not going to talk about what happens on a chemical or molecular level when heat is added to protein. Maybe I will be able to sneak a one-sentence explanation in there, but certainly no more than that. Diving deeply into the fundamentals of cooking just isn't right for the publication, audience, or platform (the article will appear online only, not in print).

I had a similar problem recently when I interviewed some teachers for an article about students using technology to cheat. The final article was fine and was well received. But as I was interviewing professors, I felt a pang in my conscience every time a professor mentioned what cheating meant for student integrity, or how the educational system at large handled dishonest students (I got a lot of "this part is off the record" on that topic), or how the professor felt about plagiarism and why s/he thought some students did it. I felt the pangs because I knew none of what they were saying would make it into the article. In fact, I worried that I would be embarrassed to email them the link to the finished piece. We talked about amazingly interesting and complex issues, but only maybe 10 percent or less makes it into the article, and it's usually the lightest and fluffiest content.

It's been rare for me, as a writer, to have a breakthrough on a piece, where I was able to work the best and most interesting elements of an interview or my research into something that I was proud to publish. But those moments are really rare. One of the personal goals that I set for myself before I started my current job (I started in January 2011) was to push myself toward publishing work that I'm truly proud to have written. In the daily grind, perpetually against a deadline, it's so easy to miss that target over and over again. For this piece about kitchen gadgets, I don't have a hard and fast deadline (although I've been thinking that I'll soon have to commit to publishing in early May, to time the piece to hit before Memorial Day, when people are still in the planning stages of their first outdoor cookout), so maybe I'll figure out a way to write something that matters.