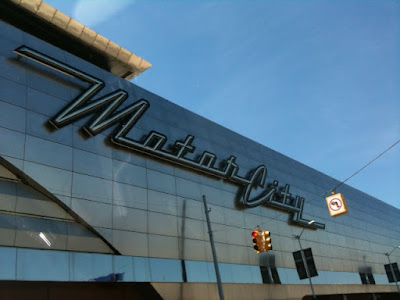 Off the coasts of the U.S., into the expanding midsection of this country, it always surprises me a little how people eat differently. While some differences are evident—the reliance on pre-prepared, processed, shelf-stable, and frozen things, as well as "casual dining" and family restaurants, of the Applebee's, Ruby Tuesdays, Chili's variety, establishments whose mainstay dishes include things that are fried and things that are smothered in ranch dressing, sometimes both—others are less apparent. I'm traveling this week by car for work from Detroit, Michigan, to Pittsburgh, Pennsylvania, with pit stops in the suburbs of Cleveland, Ohio; then looping up through Buffalo, New York en route to Ithaca, New York; then east to Boston, Massachusetts, and finally south back to my home city of New York.

The Rust Belt
Much of this route tracks along the rust belt, where the east coast and Midwest meet. People say Detroit and Buffalo are dying cities, though I see them more as struggling. The residents of these two towns have put up with this reputation for decades, and they simply endure. I'd love to say there's a vibe of tough people aggressively wrestling to make their cities vibrant again, but my take is it's more a matter of resilience. It's been too long and hard a battle to fight it anymore.

I did my undergraduate work in Buffalo, so that town and everything east of it is pretty familiar territory. My mother is a graduate of Ithaca College, who grew up in Rochester, New York. When I was a kid, we took plenty of trips to upstate New York, and more while I was at University at Buffalo.

Detroit marks new ground for me, though. And Pittsburgh—I'd been there when I was quite young, but not old enough to remember much of it, and I'm sure it's drastically different now anyhow.

What's to Eat?
Before I took off for Detroit, I did some research about where I might find a couple of good meals. My expectations in check, I settled on keeping my food bill low there. Greektown, I heard, would have the best food in the city center.

Unfortunately, I live in a decidedly Greek neighborhood in New York and already eat my fill of lemon potatoes, grilled fish, taramosalata , and tzatziki. What about other Middle Eastern food, I asked. A friend tipped me off that the suburb Dearborn had more, though she wasn't sure exactly what. Bingo. My hotel was in Dearborn, and I had a car. After a few more searches, I found a handful of Lebanese restaurants and bakeries to hit.

Food in Dearborn is cheap. Even hotel food, which is notoriously overpriced, was cheap. Nightly specials at the hotel bar for a specialty sandwich paired with a wine or beer ranged from $9 to $12. In most cities, a glass of wine alone would cost that much. Granted, the specials were horror shows for my taste (a Budweiser Wheat paired with a Philly cheese steak, for example), though not all were positioned as blue-collar meals. Riesling, shrimp, and curry all made appearances on some night of the week.

Veering away from the hotel food and onto the wide open streets of Dearborn, I noticed a lot of Arabic writing alongside English on business signs. I got take-out from Amani's Restaurant first, a $6 dinner of beef-lamb shwarma sandwich and a small fattoush salad, which came with a generous portion of soft pita on the side. There was more bread than I could eat, but I was happy with the meal. The sandwich had a reasonable portion of chewy meat without being overwhelming, and the vegetables in the fattoush were dressed and barely wilted, the mint leaves having already turned a deep, dark green color. The next day, dinner came from New Yasmeen Bakery, which sells not only sweet and savory homemade food, but also some grocery items as well.

I opted for a kofte sandwich and large square of a dessert: shredded wheat filled with a mild sweet cheese, the texture of thick yogurt, topped with ground pistachios and drizzled in warm syrup. The kofte was singularly the best I have ever had. Kofte (sometimes written as "kafte" or "kefte") can be spiced in a way that leaves it smelling like a sweaty man. If you can get past that pungency, it's great in small doses. New Yasmeen's kofte came straight from the refrigerator raw, then spent close to ten minutes getting a char. Sensational with flavors from the grill, the spices laid a tone to the meat without even being noticeable on the nose. Wrapped with pickles and garlic whip in a warm blanket of lavash, the meat struck helped to strike a perfect balance in the whole sandwich. It was small, perhaps even too small for a dinner, but it was divine. The only thing I would change is that I would order two next time. Including a bottle of water, the entire meal was $7.

The Middle Eastern influence turned up in unexpected places. I was glad to see it in Ohio, just outside of Cleveland, when I stopped for lunch at The Stone Oven Bakery & Cafe. I ordered a soup (curry carrot) and half sandwich (roast vegetables on focaccia) combo (about $7), which came with a side. My choices: chips, couscous, or tabouleh. Looking over a few other menus on display in and around Detroit, Dearborn, and in Cleveland's suburbs, tabouleh seems to be a standard option, delightfully revamping the old mayonnaise trifecta of sides: coleslaw, potato salad, macaroni salad.