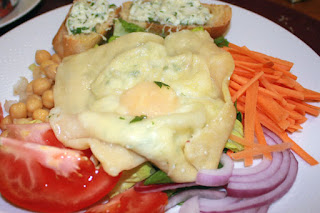 More than three years ago, I first ventured into making pasta by hand. The one thing I can never stress enough to people who are timid cooks is that pasta is remarkably easy. It's extremely difficult to mess up. The ingredients are cheap, so if you do make a mistake, it costs next to nothing to make a correction, or simply start over. And if you want it to take less than 30 minutes, it can, even though some styles of pasta certainly do require a time investment.

Last night, I taught my sister to make pasta dough from scratch. I think I won her over. We made giant "poached egg" raviolis, one per person. Filled with herb-flecked ricotta cheese and a single egg yolk nested inside, the raviolis were placed on a bed of salad, ready to spill their gently warmed yolks across the salad on which they were served. Making giant raviolis takes a minimal amount of time to prepare because the pasta is nothing more than a sheet of dough stretched flat with a rolling pin. Dinner was on the table in less than 60 minutes.

This recipe is so elegant, I'd gladly make it for company as a starter course.

Start with a clean and smooth work surface. I use my formica counter top or a large bamboo cutting board. Measure the flour into a cup-like container, stir in the salt, and flip the whole thing over quickly onto your work surface so that it becomes a mound. Using two fingers together, gently draw a circle in the center, pushing out a little of the flour as you go. Aim to make miniature volcano shape that's wide enough to hold an egg.

Crack one whole, large egg into the volcano hole. Using a fork, gently pierce the yolk and scramble the egg. Continue gently scrambling the egg and let a little of the flour fall into it. After 30 or 45 seconds, when the egg becomes smooth and free of lumps, knock a little more flour into it. The volcano will become larger, but it should still have walls. Scramble some more, while disturbing the edge of the hole so that little by little, another teaspoon or so of flour is incorporated until you have pancake-like batter.

Pancake-like batter means that when you beat the egg quickly with a fork, the whole mass of it seems to jump up cleanly, away from the flour. It holds together.

Measure out 1 ounce of water and the olive oil into a small cup. Pour about a third of it into your egg mixture, while still maintaining the flour walls, wide as they may be. Using your fork, draw little circles along the inside perimeter of the flour, pulling a little more in. Make your way around the circle once or twice, then beat the egg gently some more to incorporate the water and flour. Add a little more water and repeat. Only add as much water as you need to obtain a gooey dough. You should still have some flour around the edges.

When the dough is loose and "gooey" looking, grab a scraper or wide flat knife and slide it under the mess you have created, then flip it over on itself. You are folding the rest of the flour into the liquid-y dough. Scrape and flip a few times more.

Before you move on, the trick to the next step is to not try and get every bit of flour into the dough. Some flour and dough will get left behind. Leave those scraps out.

Dust your hands in some new flour, then gently gather the dough into a ball. If some sticks to the work surface, leave it behind. The piece of dough might be small enough to fit in your two cupped hands. That's okay! It will go a long way.

Scrap from the work surface any bits that were left behind, and dust it with a little fresh flour if necessary. Knead the dough a few times by stretching (not "smashing") it with the heel of your palm on the work surface. Fold it onto itself, turn it 45 degrees, and knead it again. Knead for only a few minutes. Some people will say to do this for up to five minutes, but I think it makes the dough stiff. The dough should be warm and reasonably soft.

Wrap the dough in plastic film and pop it in the refrigerator for 30 minutes (or up to a day) to rest.

Meanwhile, mix together the ricotta cheese and herbs. Add salt and black pepper or red pepper flakes to taste.

Divide the dough into three or four pieces so you can roll them out one at a time. Cover the other pieces in plastic or with a damp towel in the meantime. Dust your rolling pin and work surface in flour and slowly begin to stretch the dough into a rectangle. You're not pressing the dough down. You're stretching it.

From time to time, pick up the dough to make sure it's not sticking, and dust with more flour as you need.

The pasta sheet for ravioli should be thin, but not thin enough to see through. If you pick it up and it feels weak, like it might tear, it's too thin (so fold it over on itself and try again). When you've got something roughly in the shape of a rectangle, use a knife to trim it into shape.

Create a guideline in the center of the ravioli, a mark that shows where you'll fold one side of the pasta sheet on top of the filling. On the other side, place a scoop (about 2 tablespoons) of ricotta cheese. Make a well that's large enough to hold an egg yolk. Separate an egg, and place the yolk directly on the cheese.

Wet your finger with water, and trace around where you're going to fold and seal the ravioli. The water makes the pasta stick to itself.

As you fold over the sheet of pasta, try to make sure there are no air bubbles trapped inside. Air can make the ravioli tear open when you cook them. Seal them tightly by pressing around the filling. Trim up the edges again with a knife, and wrap the giant ravioli in plastic wrap. Place it in the refrigerator until you've made the others.

Boil a large pot of salted water. Gently lay one ravioli into the water at a time. When the water comes back to a boil and the ravioli floats easily, it's done. If you think it looks under-done, lower the water to a simmer and cook it up to 3 minutes. If you cook it much longer, the yolk may set.