Why I Ate a McRib 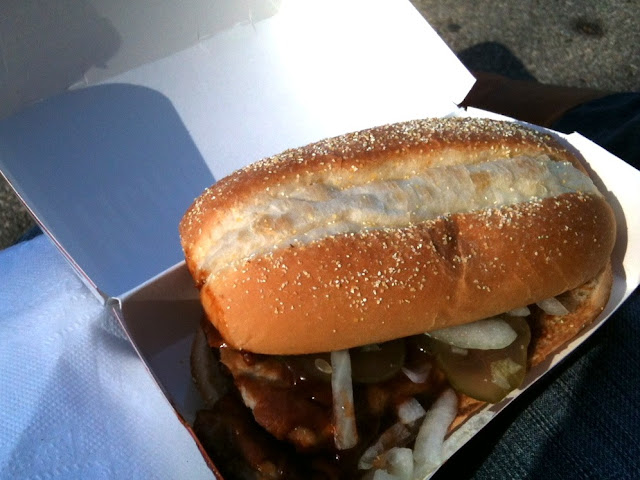 For the first time in approximately 11 years, I went to McDonald's.

My last visit happened in 2000. I had been living in London and felt a longing for something from home, and ventured out to find a milkshake. I found some vendor in Covent Garden, ordered a shake, took a sip, and that's when I learned (or as they say in British English, "learnt") that the U.K. version of a milk shake is thick, sugary milk -- not blended ice cream. I was so disappointed that I marched on over to a McDonald's on Tottenham Court Road and bought myself a real American shake. It was... okay, I guess. It satisfied my longing for something from the States, although it had a strange banana base flavor with which I have still not come to terms.

Eleven years later, here I am without a milkshake and instead holding a McRib sandwich.
Known in 1980s and 1990s school cafeterias as the rib-a-cue, the McRib is allegedly a slab of processed pork made to resemble a rib-like construction, smothered in sweet barbecue sauce, presented in a roll or bun. The modern day McDonald's version tops the "meat" (there is some controversy over what's in it, so the scare quotes are indeed warranted) with sliced pickles and raw white onion so pungent you can taste it hours after ingesting. I've been reading that the pickles and onions appeared in the original McRib sandwich, but I don't remember them, to be honest.

A Total Aversion to Fast Food
The journey to the McRib was an experiment in nostalgia.
Aside from the shake, I haven't eaten anything from McDonald's for years. I don't support the company, nor fast food companies in general, nor their business philosophies. On the whole, I think most fast food tastes horrifyingly like deep-frying oil, salt, and sugar. I can't even bring myself to even inhale while walking by a McDonald's, as the smell of it turns my stomach.

Call my complete aversion to fast food snobbery if you will, and I won't disagree. On the one hand, I simply cannot stomach that processed garbage. On the other hand, I refuse to eat it for reasons other than first-hand experience, like morals and ethics. But the McRib is a nostalgia project.
Then again, if I haven't eaten McDonald's in more than 11 years, how do I know if it's really as bad as I remember?

Young, Hungry, Pudgy
The McRib supposedly first appeared in some test markets in the 1970s, but it went mass market in 1981, according to Wikipedia.
It was then pulled from the menu in 1985.
Years later, it returned, but only in some markets.
Now, restaurants can choose to carry it year-round or not, and those who don't must carry it when McDonald's brings it back as a nostalgia food, drawing suckers like me in to spend $1.99-$2.99 for some disgusting, stinky sandwich that we don't want to so much eat as buy and own like a piece of memorabilia.

What's shocking to me about those dates is just how young I was when I got my hands on a McRib. I was six or younger.

The school cafeteria food version was a staple for years and may still be on some menus today. It was by far my favorite school lunch food.
The rib-a-cue came in an ever so slightly crusty French roll that held up to the fake ribs and sauce better than the McD's bun. I remember it being tangy and sweet, with sauce that stuck to the edges of my mouth. Ridges on the patty resembled faux bone and cartilage.

When I was a kid, I had the same deep-rooted sweet tooth that I have now, the same one that drives me to eat jam directly from the jar or devour an entire chocolate bar in one sitting. As an adult, I have more restraint and rules for my sweet binges, but as kid, nothing could come between me a the finger-licking rib-a-cue.
Before the McRib, my go-to McDonald's food was chicken McNuggets, which I ate for the sweet and sour sauce. I didn't care what I was dunking in that well of goo. It was all about the sauce.

I remember having an insatiable appetite as a kid, but I guess I had convinced myself that four, five, and six years-old would have been too young to be such a glutinous pig. But apparently not. If Wikipedia's dates are correct, I was McRibbing it up a much younger age than I realized before.

Today's McRib
Curiosity and a desire to have some first-hand basis for my anti-fast food snobbery are what prompted me to buy and eat a McRib today.
My sister and her boyfriend came with me. They eat fast food occasionally, so it wasn't a momentous event for them, although I believe they told me that they had never had a McRib before.

How was it? The short answer is: better than I expected, but not as a good as I remembered.
The fresh parts of the sandwich, namely the bun and onions, were actually fresh. The meat tasted as much like pork as a chicken McNugget. It might as well have been vegetarian fake meat. The sauce was not as gloppy as I imagined it would be. The pickles were pickles.

I don't regret eating it, but I'd be hard pressed to eat anything else from McDonald for the next 11 years.