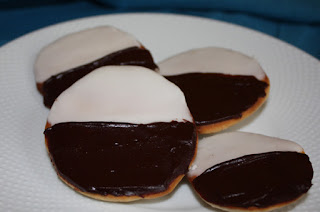 
December is the month I bake cookies, and I usually bake a lot of them. Last year (2010), I practiced over and over again making black and whites, the quintessential New York cookie. They're tough to make, but not so difficult as to prove disastrous the first few times around. My recipe for black and white cookies is here. 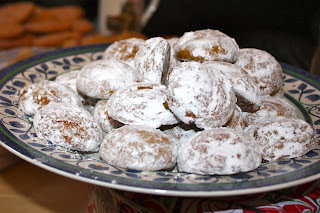 This year (2011), I switched gears and tried to make pfeffernusse, a German cookie that translates to "pepper nut" because it's the color and shape of a nut, but spiced with black pepper ( as well as a number of other spices).

The recipe I used (well, truth be told, I amalgamated several recipes and riffed off a few of them) contained butter (not margarine and shortening, as I saw in some recipes) and molasses, which gives the pfeffernusse a walnut color and a soft gingerbread-like texture. I heavily sprinkled in cinnamon, but went light on cloves, and left out allspice altogether, mostly because I didn't have any on hand.

After the cookies had come out of the oven and had cooled, I shook them in a bag of powdered sugar to give them a snowy look. Each cookie crackles slightly on top, and the sugar sticks into those crevices to make a random but pretty pattern.